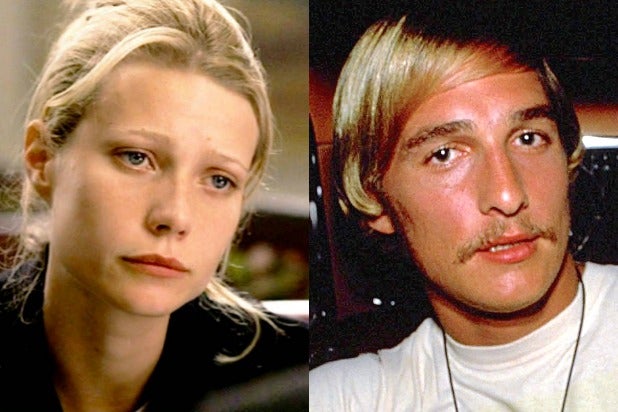 In the '90s: Gwyneth Paltrow in "Se7en" and Matthew McConaughey in "Dazed and Confused" (New Line/Gramercy)

We’d like to take this opportunity to remind you, or perhaps tell you for the first time, that “Titanic” could have been a very different movie — starring Matthew McConaughey and Gwyneth Paltrow as star-crossed lovers Jack and Rose.

Matt Donnelly, my co-host of the “Shoot This Now” podcast, discusses the casting decisions that went into James Cameron’s 1997 epic in our new episode, which you can listen to on RadioPublic or on Apple or on Spotify or right here.

Did you know that “Titanic” considered McConaughey and Paltrow? It’s been reported before, but it was news to me. Kate Winslet told Stephen Colbert about McConaughey’s near-casting, and also told USA Today that her role almost went to Paltrow, Winona Ryder or Uma Thurman.

“Shoot This Now” focuses on stories that should be made into TV shows or movies. We ended up talking up the 1997 “Titanic” in our latest episode because the podcast is about the true story of Nazi Germany spending $180 million dollars on a failed propaganda film called “Titanic.” It blamed British greed for the infamous disaster at sea.

If you’ve never heard of it, that’s probably because the Nazis realized the failure of their propaganda film, and banned it. But the story doesn’t end well. Thousands died on the Cap Arcona, the German ship the Nazis used as a stand-in for the Titanic, when it sunk at the very end of World War II.

We usually focus on stories that aren’t already destined for the screen, but this week we messed up. It turns out a Nazi Titanic movie is already in the works.

We had a lot of fun with this episode anyway — including imagining how McConaughey would been different than Leonardo DiCaprio as Jack. (For starters, he’d probably wear a shirt less often.)

We also talk about the history of the Cap Arcona, which was built to improve on the Titanic, impersonated the Titanic onscreen, and later sunk even more disastrously than the Titanic did in 1912.

As for that Nazi Titanic movie that’s already in development, we can’t wait to see it. Director George Gallo will direct from a script by Scott D. Rosenbaum and Josh Posner, according to Deadline.