What is it about men in skirts? If they’re in full drag and speaking in a fluty falsetto, it’s funny. But if they’re wearing a toga or a leather miniskirt that’s part of Greek- or Roman-era armor, not so much. 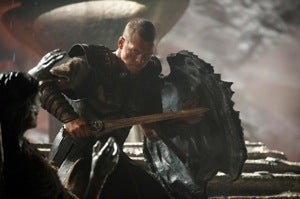 Not that Sam Worthington doesn’t boast a fetching pair of gams as the Greek demi-god Perseus in “Clash of the Titans.” Peeking out from beneath his shortie armor, his upper thighs appear muscular, his brawny calves shapely.

But great legs alone do not a movie make. (Just try to name a memorable Betty Grable film.)

Sword-and-sandal epics by their very nature tend to be cheesefests, and this action-heavy remake of “Titans” — the original appeared in 1981 — is no exception.

Along with biblical epics, such movies always strike me as poor man’s Shakespeare. Invariably, the dialogue is wannabe highfalutin, the acting self-important and irredeemably campy, the costumes an uneasy mix of heavy ornamentation and strategic scantiness, and the hairstyles embarrassing. (Bangs flatter no man, though the braided cornrows that turn up on Argosian warriors in “Titans” are not necessarily an improvement.)

When great actors appear in these movies, few cover themselves in glory. Paul Newman barely survived his film debut in 1954’s “The Silver Chalice,” even taking out an ad in the trades apologizing for his performance. And an aging Sir Laurence Olivier, who was at that point pretty much jumping at any Hollywood role that offered a cashable paycheck, well, he wore his beard well as Zeus in the original "Titans." 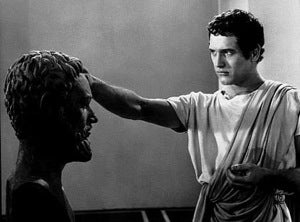 There are exceptions, of course, the rare sword-and-sandal movies that shine. Those would be 1959’s “Ben-Hur,” 1960’s “Spartacus” and 2000’s “Gladiator.” Each benefited from having a strong-willed director and a talented male star boasting appealingly rough edges—well, maybe not Charlton Heston in “Ben-Hur.”

The embarrassments in this category are legion (Roman, and otherwise). Consider 2004’s lackluster — other than Brad Pitt’s glistening abs — “Troy” and 2006’s videogame-like “300.” Would anyone ever want to sit through either of those films a second time?

Well, yes, millions of guys would. And have. Especially overseas. “Troy” grossed nearly a half billion dollars worldwide and “300” speared just a little less.

Clearly, these movies speak to men, or maybe to the boy still lurking in every man.

It’s boys, especially tweeners and adolescents, who will find the nonstop action and special effects of “Titans” engaging and are unlikely to be bothered by the movie’s lack of a compelling story or multidimensional characters.

“Titans” is set in ancient Greece, where Perseus leads humans in a battle against the gods, the nastiest of whom is Hades (Ralph Fiennes, doing a variation on his hissing Valdemort from the Harry Potter series), god of the underworld. In siding with man against the gods, Perseus rejects his own father, the mighty Zeus (Liam Neeson).

Many battles ensue, against giant scorpions, snake-tressed Medusa (she of the gaze that turns men to stone), and the Kraken, a fearsome sea monster who, as depicted here, looks like a giant, demonic snapping turtle.

It’s all pretty silly, especially scenes set at the gods’ headquarters on Mt. Olympus. The silver-and-ice set looks like nothing so much as the Fortress of Solitude from the Christopher Reeve-era Superman films. I kept expecting Marlon Brando’s Jor-El, complete with that gleaming white bouffant wig, to stroll onto the scene.

But “Titans” could yet serve a higher purpose. In the same way that a throwaway literary reference on “The Simpsons” occasionally spurs a kid to crack “Anna Karenina” or “Tender Is the Night,” perhaps younger viewers of “Titans” will develop a consuming interest in Greek mythology or mull careers as classics scholars. In which case, may the gods be praised.