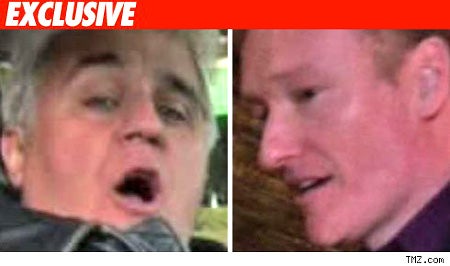 Like a lot of journalists I know, I tend to scoff at TMZ – not because they pay for scoops. Mostly because I get nausea from their incessant overbranding of “exclusive,” and because they seem to blare “wolf” way too often (most recent example: That JFK photo TMZ said “Could Have Changed History” turned out to be fake, and not exclusive).

But TMZ’s story about NBC moving Jay Leno out of primetime – while not entirely right, at least not yet – appeared to catch their rivals and the NBC PR machine offguard Thursday, which in turn created the resulting media stampede and public relations mess NBC finds itself in today.

Picking up on a report of Leno’s pending cancellation by FTVLive — which turned out to be wrong — Harvey Levin and co. found a source at the network (I’m told the story originated from a small group of executives on the West Coast) who told them “Jay Leno is going back to his 11:30 PM time slot, and it’s looking like Conan O’Brien is the odd man out.”

Which led to NBC having to issue a series of bizarre, vague, non-denial denials:

“Jay Leno is one of the most compelling entertainers in the world today. As we have said all along, Jay’s show has performed exactly as we anticipated on the network. It has, however, presented some issues for our affiliates. Both Jay and the show are committed to working closely with them to find ways to improve the performance.”

"We have the best comedy team in the business. We remain committed to keeping Conan O’Brien on NBC. He is a valued part of our late-night lineup, as he has been for more than 16 years and is one of the most respected entertainers on television."

Both statements left ample room for speculation, the kind that TMZ loves to tickle.

Also worth noting: As recently as Monday, a high-level source at NBC assured TheWrap that nothing was afoot on the late-night front.

Which made yesterday’s revelations – and soft response by NBC – even odder. Leno’s move to primetime was, after all, a high-stakes TV gamble – one would’ve thought that NBC would have had the foresight to be prepared for the media maelstrom when news like this leaks.

It appears they weren’t. When asked why the move wasn’t mentioned earlier in the week, the network source said Thursday, “Everything just happened so fast in the last 24 hours.”

Which is troubling, given how long they had to install Conan, and the lengths NBC went to in hyping Leno in primetime.

"For a network to have put as much effort and promise into moving Leno to 10 o’clock and replacing him with Conan O’Brien, and then after half a season to potentially cancel it, which may also mean canceling Conan O’Brien — I mean, that’s like shooting yourself in the mouth," New Yorker contributor Ken Auletta said Thursday.

From a PR standpoint, that’s what NBC did.

TMZ, for its part, didn’t. This time. Which – gotta hand it to them – will make me pay a little more attention next time they cry "wolf." Even if they say it’s an exclusive.