TMZ was among the first outlets to report rap legend The Kidd Creole was convicted in the stabbing death of a homeless man on a New York City street.

Unfortunately, the site’s article was published with a photo of hip-hop veteran Positive K instead of showing Kidd Creole, a founding member of rap group Grandmaster Flash and the Furious Five. 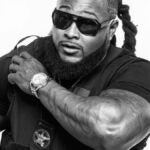 After TMZ’s article went viral, Positive K took to social media to express his dismay. He posted a screen grab of the story on Instagram, along with a message saying the mistake had caused him “humiliation and devastation.”

“TMZ has carelessly & recklessly used my face in a photo on their website to report a story on another rapper that is [sic] reportedly been convicted of manslaughter,” Positive K shared with his followers.

“I cannot begin to describe the humiliation and devastation this has caused myself, my loved ones and my fans. But TMZ, this is also not a good look for your platform,” he continued. “This is completely unacceptable as I now deal with a situation that may become timeless & endless long after it’s resolved… NOW HOW DO YALL WANT TO FIX THIS???”

TMZ has since replaced the picture on the story, but as you can see above, Positive K and others captured it before it was corrected.

TheWrap reached out to TMZ for a comment about the article, but so far we haven’t heard back.

Positive K, birth name Darryl Gibson, is a 54-year-old rapper and songwriter from the Bronx best known for his 1992 hit “I Got a Man.” Kidd Creole, 62, is also from the Bronx.

Prosecutors said Kidd Creole killed John Jolly, 55, during a dispute. As previously reported, Kidd Creole was working as a security guard and handyman in the area where the killing occurred. The rap pioneer thought Jolly, who was drunk at the time, was gay and had been hitting on him. Following his arrest, Kidd Creole claimed he was acting in self defense. However, jurors disagreed. He had been facing a murder charge, but was instead convicted of manslaughter. He is scheduled to be sentenced on May 4.

Grandmaster Flash and The Furious Five were popular in the early 1980s. In 2007, they were inducted into the Rock and Roll Hall of Fame.