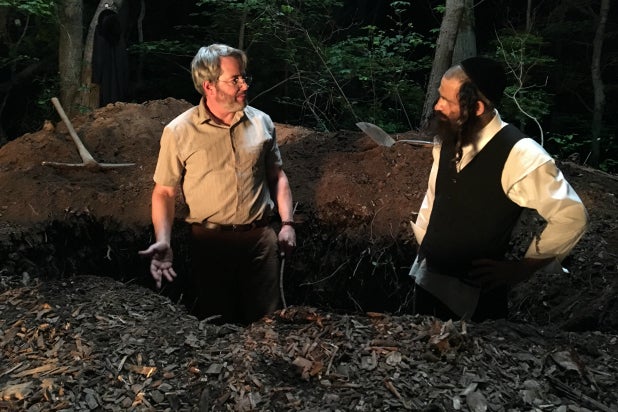 The intersection of grief and faith is a bit complicated, whether in reality or as fiction. No two people grieve the same way, and no two cultures have the same structure for what happens when a loved one dies. First time feature film writer-director Shawn Snyder dives right into the nitty gritty of science, loss and faith, and delivers a charming, quirky, human and, at times, macabre, film in “To Dust.”

Shmuel (Géza Röhrig, “Son of Saul”) has just lost his wife to cancer. A Hasidic cantor, he does everything his faith asks him to do following her death, but still he is obsessed with what might be happening to his wife’s corpse. Is she decomposing? If so, how? And more importantly, is her soul suffering as her body rots into the Earth? Completely oblivious that his two sons are also grieving, he goes in search of answers and meets Albert (Matthew Broderick), a biology professor at the local community college. Albert initially rejects Shmuel and tries to send him away, but then, seeing a man lost in grief, decides to help Shmuel find out what happens to a decomposing corpse through some odd, and outrageous, experiments.

Though the film’s opening sequence is melancholic and somber, the rest of the film keeps grief in focus but offers a mix of charm and dry humor in its two leads. In every sense of the story, this film plays like a buddy comedy. An unlikely duo, Röhrig and Broderick are the yin and yang to the overall tone of the film. Shmuel’s pain and conflict over going against the teachings of his faith are complemented by Albert’s cynical humor and devotion to science.

Broderick can definitely play a quietly insidious character; Albert calls to mind Broderick’s once-idealistic teacher in “Election,” but with less deviousness and more charisma. Röhrig is refreshing to watch as a man going through real emotion; Shmuel doesn’t know what to do with his feelings, but he’s trying to make it to the other side of grief with his faith intact. He walks a fine tightrope in balancing pain and healing, without ever going over the edge to either way. Grief is, after all, a journey — there is no quick fix for it.

Snyder and co-writer Jason Begue’s smart script doesn’t treat death as a joke, and that lends a bit of compassion to some otherwise morbid scenes involving a science experiment with a pig and a view of some corpses. I personally don’t know much about Hasidic Jews, but I do know how complicated it can be to mix faith and science without mocking one or the other, and there is a feeling of care in the script to both sides of spectrum. The film neither preaches nor patronizes one character, or one way of life, instead offering a look at two men simultaneously losing a bit of their guards and accepting different truths about the circle of life.

There’s only one real plot hole — involving Shmuel’s thinking their father has been possessed by a dybbuk — which probably should have been a bit more fleshed out to get a glimpse of Shmuel before his wife’s death. The idea of a man so devout suddenly committing many “sins” over an all-consuming need to know the biology of it all could have used this context. But, it’s a small quibble.

Cinematographer Xavi Gimenez (“The Machinist”) crafts shots which emphasize that this is a story about loss. No matter where Shmuel is, even in the daylight, there is a greyish hue in the air, until one day there isn’t. The lighting — whether at a corpse farm, a school, or home — is a constant reminder that no matter how witty “To Dust” might be, the shadow of loss is the binding constant throughout the film.

Also Read: With Anti-Semitism on the Rise, the Jewishness of 'The Marvelous Mrs. Maisel' Is a Marvel (Guest Blog)

A unique take on one of the most painful and important parts of being human, the film is original and honest. Even knowing very little about the traditions of Hasidic Judaism, it was easy to relate to the very human element of finding a connection that ultimately leads to healing.

“The Upside,” opening this week, is a remake of the French box office smash “The Intouchables”

Opening this weekend is "The Upside," an American remake of "The Intouchables," a film that made so much money in France that it became a cultural event. After earning $166 million in France, the country's second-highest-grossing film ever, and over $426 million worldwide, an American remake of the film was inevitable. But surprisingly, box office hits abroad don't always translate when remade with American actors, and the ones that do rarely resemble their original inspiration. Here are the highest-grossing American remakes of foreign films (all domestic box office figures via Box Office Mojo).