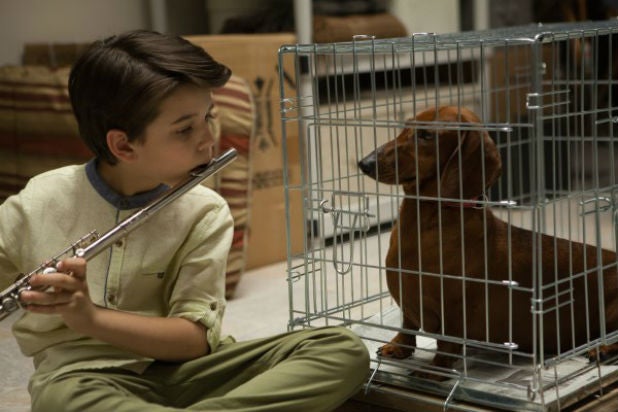 Todd Solondz trotted out his “Wiener-Dog” for a Sundance world premiere on Friday night, and the result was a mix of morbid humor and awkward existentialism that have become hallmarks of the director.

Featured in the U.S. Dramatic Competition, “Wiener-Dog” follows several lost souls and the tiny Dachshund (the breed got the nickname thanks to its long, hot-dog-shaped body) that connects them.

Jokes aside, Solondz is beloved at Sundance and in the indie film community for edgy fare like “Welcome to the Dollhouse,” “Happiness” and “Palindromes” — yet “Wiener-Dog” is nowhere near as heavy as those projects.

“Like, the most fun shit-show,” said one man to a group of friends in the lobby of the Eccles Theater following the screening. Another moviegoer could be heard more artfully calling the movie a “Sistine Chapel of weirdness.”

Wealthy atheists telling their cancer survivor son that death is inevitable, a veterinarian assistant using a puppy to seduce a heroin-addicted former flame, a dying matriarch hallucinating versions of her own inner child to show alternative versions of her life (if, for instance, she “was a bigger tipper”) are just a few of the dark threads that had the theater giggling and covering their faces in shock.

We won’t spoil the fate of said Wiener-Dog (whose individual pet names range from “Doody” to “Cancer”), but let’s just say a drive to a scenic farm is not in store for the canine.

Credits rolled with an expected notice that no animals were harmed during production.

In his personal life, however, Solondz told the crowd at a Q&A following the premiere that he had numerous dogs as child, but “none lasted very long.”