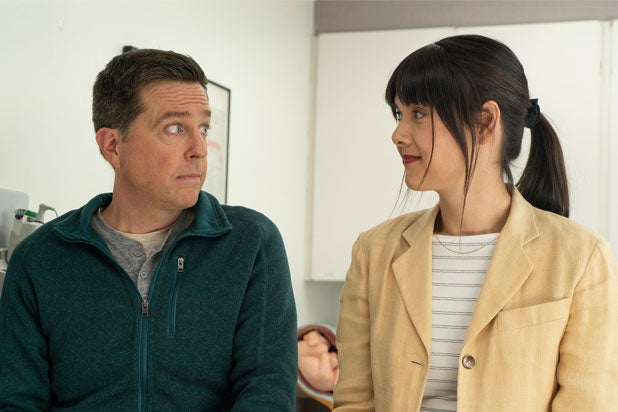 If you’re a fan of Patti Harrison’s scene-stealing work on “Shrill” — or a devotee of the brilliant shock-humor of her Twitter feed — you’ll be delighted but not entirely surprised by her stellar work in “Together Together,” a movie that gives her the space to be hilarious, yes, but also heartbreaking and human.

The comedy from writer-director Nikole Beckwith (“Stockholm, Pennsylvania”), making its debut at the Sundance Film Festival, leaps into the world with all the attributes audiences expect from a character-based comedy: It’s bright and witty and packed with laughs, but those laughs stem from real empathy and understanding of its characters.

Harrison stars as Anna, who’s serving as surrogate for Silicon Valley bachelor Matt (Ed Helms); he’s ready for fatherhood even if he doesn’t currently have a partner. Harrison’s deadpan and Helms’ dorky enthusiasm clash early and often, as Matt’s perpetual efforts to be respectful of Anna’s space and her private life bump up against his desires to micromanage her pregnancy and his excitement about impending parenthood.

Also Read: Ed Helms' 'Together Together' Nabbed by Bleecker Street Ahead of Sundance

For her part, Anna is trying to remain as detached as possible, having already given up one child for adoption; she dropped out of high school when she got pregnant the first time, and now she’s looking to return to school once she’s given birth. But these two odd loners wind up bonding (including a joint binge-watch of “Friends”), even though the boundaries of their relationship get blurrier and blurrier. Still, while they might not be “together together,” as Anna’s co-worker Jules (Julio Torres, “Los Espookys”) puts it, the two are clearly impacting each other’s lives in ways that have nothing to do with the pregnancy.

Beckwith has assembled a terrific ensemble of comic talent, from veterans like Helms (giving his best film performance since “Cedar Rapids”), Nora Dunn, Tig Notaro, and Fred Melamed to up-and-comers like Torres. But “Together Together” absolutely belongs to Harrison, giving the kind of star-making performance that puts an actor on the map. (Think Tiffany Haddish in “Girls Trip” or Melissa McCarthy in “Bridesmaids.”) Her skill at a prickly rejoinder is downright surgical, but the waves of emotions passing over her face in closeup as Anna gives birth are devastatingly poignant.

Speaking of “Friends,” the film creates a cozy, rom-com world for its characters, from Anna and Jules’ coffee shop to Matt’s spacious home, the kind that only Silicon Valley money can afford in modern-day San Francisco. Cinematographer Frank Barrera (“Dog Days”) accentuates the aspirational pleasantness of the surroundings, and editor Annette Davey (“Poms”) has a mastery of comic timing that matches the performers’.

Perhaps Beckwith’s greatest achievement here is making a movie about pregnancy and parenthood that adamantly avoids gooeyness and contrivance. Anna may carry Matt’s child, but that doesn’t mean they’re going to fall in love by the third trimester, if ever. Matt’s friends and family might well be awkward around Anna at a baby shower, and she’s fully allowed to be upset about it. And even if the apex of intimacy between Matt and Anna is that they hold hands, the film makes that moment as meaningful, and as earned, as any other act of physical affection.

Movies like “Together Together” are a reminder that indie films, at their best, are the result of an artistic vision and not of studio notes, which surely would have ground down everything that’s weird and wonderful about this delightful comedy.

“Together Together” has been acquired by Bleecker Street.