Tom Brady and the Super Bowl Champion Tampa Bay Buccaneers visited the White House Tuesday to meet with President Joe Biden. During the press conference, the GOAT QB opened with the typical speech about how no one believed they could win, but wound up making a joke about the 2020 election results.

“We found our rhythm, we got on a roll. Not a lot of people think that we could’ve won. In fact I think about 40% of the people still don’t think we could’ve won,” Brady said in reference to “The Big Lie” that persists about the 2020 election. “You understand that Mr. President?”

“I understand that,” Biden said in a quick response that got a laugh.

Brady didn’t refer to former President Trump by name, but he did call back to one of Trump’s favorite nicknames for President Biden, referring to himself as “Sleepy Tom.”

Brady brought up a game from the 2020 season in which playing against the Chicago Bears, he had one last chance to win in the fourth quarter and on 4th Down and ran a play that ended the game, but Brady was convinced it was actually 3rd Down and that he still had one more chance. Brady and head coach Bruce Arians were previously adamant that he did not forget the number of downs remaining, so Tuesday’s admission was refreshing as well.

“I lost track of what down it was in 21 years of playing, and they started calling me Sleepy Tom,” Brady said. “Why would they do that to me?” 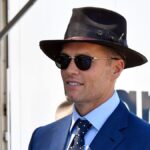 Tom Brady’s Super Bowl LV victory was historic, with Brady at age 43 moving to a new team after playing his entire career with the New England Patriots managed to not only make the playoffs but defy the odds and beat the favored Kansas City Chiefs and Patrick Mahomes, limiting the Chiefs to just three field goals in a 9-31 loss.

The Tampa Bay Bucs also presented Biden with a 46 jersey at the ceremony, which you can see above in a photo with Biden standing next to Brady and Bucs head coach Bruce Arians.

Check out video of Brady’s speech below: