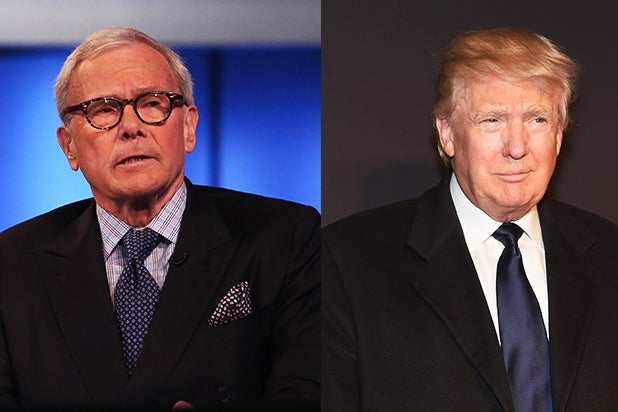 According to a Mediaite report, the legendary NBC newsman was at the National Book Festival in Washington, D.C., on Saturday to discuss his book, “A Lucky Life Interrupted,” when he told the crowd that the idea of covering Trump was not exactly his cup of tea.

“If I was at ‪NBC News right now leading with‪ Donald Trump every night, I’d call in sick,” said Brokaw.

The room apparently erupted in applause following the comment.

.@tombrokaw: "If I was at @NBCNews right now leading w @realDonaldTrump every night, I'd call in sick." #NatBookFest15

Tom Brokaw at nat bk festival: if I had to deal with nightly news & leading w/ Trump every night Id call in sick.

Tom Brokaw on leaving NBC: 'If I were there now, and leading with Donald Trump every night, I would call in sick.' *Room erupts in applause*

Brokaw told Politico recently that the Trump phenomenon will fizzle out as he becomes a victim of the “UFO rule” in politics: “at some point, the unforeseen will occur” and something will tank him.

Brokaw is not the only one who thinks Trump isn’t worthy of news coverage.

In July, The Huffington Post announced it will cover Trump in its entertainment section instead of its politics vertical.