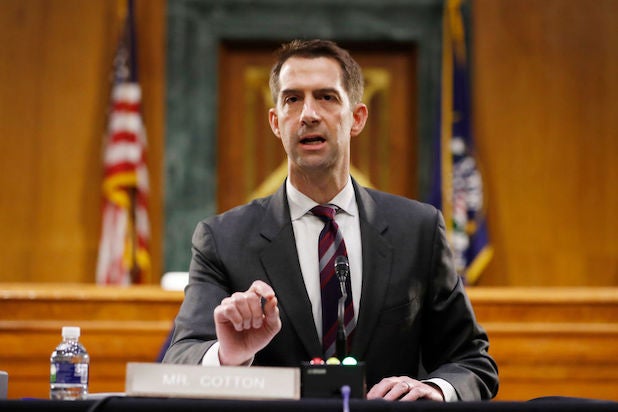 Sen. Tom Cotton, whose controversial op-ed led to the resignation of the New York Times opinion editor who didn’t even read it before publishing, branded interim editor Katie Kingsbury as a “far-left radical” on Monday.

Appearing on “Fox & Friends,” Cotton described Kingsbury is “a far-left radical who will throw in with, not stand up to, the woke mob of children at the New York Times who get triggered any time they hear a conservative opinion.”

In contrast, Times publisher A.G. Sulzberger praised Kingsbury extensively Sunday, saying, “Katie has been instrumental in reimagining Opinion since she joined The Times from The Boston Globe, where she served as managing editor for digital and won a Pulitzer Prize for editorial writing. I look forward to working with her as she steps into this role at this important moment.”

Cotton also told Fox News’ Brian Kilmeade the saga that started with his op-ed and ended with Kingsbury’s interim promotion was “amazing.”

The previous opinion editor, James Bennet, resigned Sunday after a week of brutal criticism — and an open staff revolt — over the publication of a column by Cotton, a conservative Arkansas senator, which called for the military to crush the George Floyd protests.

Dozens of Times staffers broke the company’s unevenly applied social media policies to publicly denounce the piece, tweeting, “This puts Black @nytimes staff in danger,” and they were joined by some of the paper’s most high-profile contributors. The New York Times Guild also condemned the paper’s decision, calling it “a clear threat to the health and safety of journalists we represent.”

“Last week we saw a significant breakdown in our editing processes, not the first we’ve experienced in recent years,” Sulzberger said of Bennet’s resignation.”James and I agreed that it would take a new team to lead the department through a period of considerable change.”

Watch Steve Doocy sagely nod his head after Tom Cotton denounces interim NYT opinion editor Katie Kingsbury as "a far-left radical who will throw in with, not stand up to, the woke mob of children at the New York Times who get triggered any time they hear a conservative opinion." pic.twitter.com/eXY7BgR0Mf