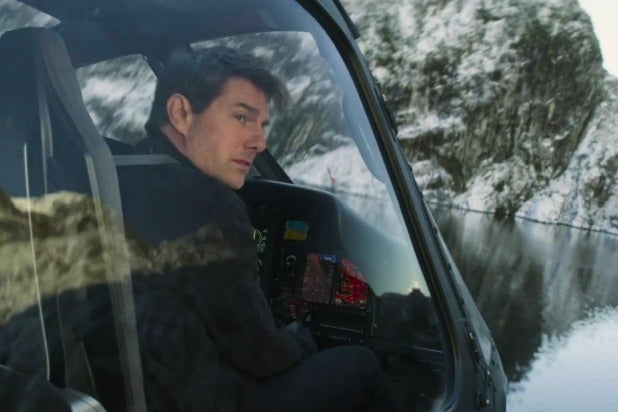 Not even a pandemic will stop Tom Cruise from risking life and limb for the sake of his craft. “Mission: Impossible 7” director Christopher McQuarrie posted a picture on Instagram Sunday of the series’ longtime star shooting a scene in Norway… on the top of a moving train.

“Have you and Tom every ridden INSIDE a train? It’s quite lovely,” actor Glen Powell responded.

Norway’s scale and beauty have left an indelible and defining imprint on our film and reminded us that anything is possible. On behalf of everyone working on Mission: Impossible, our sincerest thanks to The Norwegian Film Incentive, The Norwegian Railway Museum, the infinitely patient Strand and Rauma Municipalities, our endlessly enduring Norwegian crew, along with everyone who supported our filming here. And, of course… The Mountain. Most of all, we give thanks to the warm and welcoming people of Norway. Your kindness and consideration are nothing less than an inspiration. We’ll miss you dearly and look forward to seeing you again. Tusen hjertelig takk. Buckle up, Roma. Here we come… #MI7MI8

A post shared by Christopher McQuarrie (@christophermcquarrie) on Oct 4, 2020 at 3:15am PDT

Footage of the scene was also taken by a group of bystanders and was later posted on TikTok. The fan footage shows Cruise focusing on the fight atop a classic European train car, taking a moment between takes to wave to the cheering onlookers, who realized what was going on.

Filming on “MI7” paused in February due to the COVID-19 pandemic but resumed in September under special social distancing guidelines. Those guidelines haven’t stopped the film from holding back on its trademark stunts. Last month, more fan footage caught Cruise riding a motorcycle off a giant ramp on the end of a canyon before parachuting to safety.

Christopher McQuarrie and Tom Cruise are taking Mission: Impossible 7 to another level pic.twitter.com/eZaa5z8s5Y

These stunts will join the long list of death-defying stunts Cruise has undertaken without a double over the course of his “Mission: Impossible” career. Other stunts, include a 25,000-foot jump out of a military jet, holding his breath for over six minutes, personally flying a helicopter for a chase scene in a ravine, and clinging to the side of a plane as it takes off. At CinemaCon in 2018, co-star Simon Pegg joked that “the difference between you watching Tom in those action scenes and us watching him film them is that you know Tom lives in the end.”

“Mission: Impossible 7” is currently set for release on Nov. 19, 2021. Check out more of Cruise’s stunts in the gallery below.