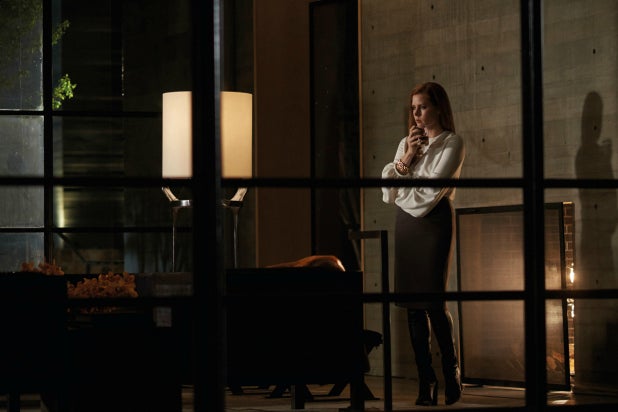 Adams plays an icy modern artist named Susan who receives a package from her ex-husband Edward (Jake Gyllenhaal). It’s his debut novel, titled “Nocturnal Animals,” a harrowing story of a husband and father named Tony whose wife and daughter are abducted by a group of West Texas thugs.

Susan is happy for the distraction, thanks to a growing divide with current husband Hutton (Armie Hammer). The structure of the film gets a bit meta, vacillating between Susan reading the novel — a complete depiction of the action within the book (Gyllenhaal also plays Tony in the story-within-the-story, as Susan sublimates her ex for his lead character) — and flashbacks to how Susan and Edward met, and eventually how she came to leave him.

It’s plenty of story to chew on, but nothing short of stunning.

The present-day sequences are classic : steel-edged, militant glamour with no detail spared. Adams has never been so empowered, with a little help from her killer wardrobe and the authority that Ford’s aesthetic is known for.

The West Texas brutality (anchored by a menacing, if not occasionally over-the-top, Aaron Taylor-Johnson) in the novel sequences also has a decadence and raw beauty about it (don’t be surprised that Ford knows his way around a ranch).

But it’s the dryness, the world-weariness, of Ford’s script that got the strongest reaction from an equally jaded industry (which counts) — who applauded as credits went  up.

A brief cameo from Michael Sheen and Andrea Riseborough, as a gay man/straight woman married couple, sent the crowd into giggling fits.

“It’s not so bad having a gay husband,” Riseborough says, dressed like a high-fashion Auntie Mame in chunky jewels and an Andre Leon Talley housecoat. “I’m certainly the only woman in his life.”

At a dinner party hosted by the pair, Sheen’s character congratulates Adams’ Susan on her recent art exhibit — naturally, she hated it. It’s junk. It contributes nothing.

Sheen deduces that art, or any of the work we are driven to do in our youth, eventually means nothing.  He counsels Susan to enjoy the “absurdity of our world. It’s much less painful than the real world.”

This sort of navel-gazing, when dressed in and whispered about over wine, brings to vibrant life conversations one might hear in hotel bars and airport lounges at the festival itself.

A cameo from Laura Linney as Adams’ snobbish Texas matriarch (“Just wait,” Linney says with mile-high hair, “everyone eventually becomes their mother”), jokes about the incessant iPhone releases, a wink at Gyllenhaal’s heartthrob status in the gay community, jabs at the horrible plastic surgery walking around L.A. — all landed perfectly with the inside baseball crowd.

There’s a lot here for the mass audience as well — especially in the form of Michael Shannon, a police detective who reinterprets the standard wit and grit of the Western genre with an aggression and uneasiness all his own. It’s a performance that could go the distance through award season with the ease of, say, slipping on a pair of tortoise frames.