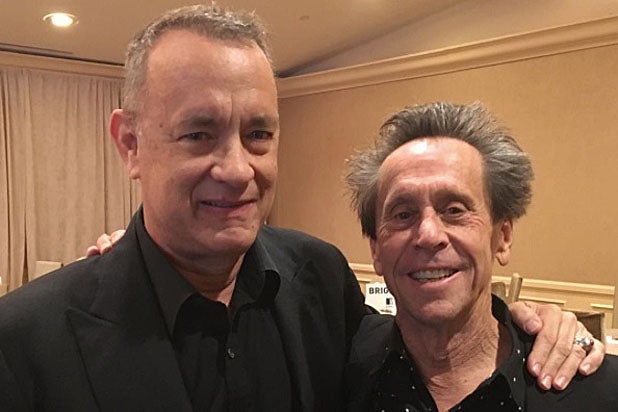 Tom Hanks and his oft collaborator, producer Brian Glazer, had a freewheeling conversation during a dinnertime presentation on Monday that ended with a peek at their upcoming mystery-thriller “Inferno.”

It’s their third film based on a Dan Brown novel (“The Da Vinci Code”), which played during the Milken Institute Global Conference.

The new teaser showed Hanks reprising his role as Robert Langdon. This time he’s tasked with thwarting the release of a virus that threatens to wipe out the human race.

“The film asks the question: Is hell a mental or physical state?” Hanks posed to the crowd at the Beverly Hilton in Beverly Hills, California on Monday night. “Is it something we created or something that exists on its own organically?”

“Dante’s description of hell in ‘Dante’s Inferno’ — that’s what we think of hell,” Hanks went on to say. “But you could say it’s manmade,” he added, citing overpopulation in parts of the world. “There are too many of us. We cannot sustain our own lives.”

The footage showed a rapid-fire collage of the film, also starring Felicity Jones. It launched with an aerial shot of Florence, Italy, and moved to Langdon (Hanks) desperately unravelling a puzzle involving a map of hell depicted in “Dante’s Inferno.”

At one point, a flood of blood gushes from multiple doors of a building, reminiscent of “The Shining.”

Was it a dream sequence or a piece of the puzzle gone bad? Audiences will find out when “Inferno” comes out Oct. 28.

Hanks and Grazer, whose combined careers represent $8.5 billion in domestic theatrical grosses, have worked together on six films including “Splash,” “Apollo 13” and “The Da Vinci Code.” The two Hollywood luminaries fired through their body of work, punctuating a series of clips with fun, behind-the-scenes stories.

Here are some other highlights from their talk:

“Splash”:
“There was more time spent super-gluing [Daryl Hannah‘s] hair to the small of her back than in any other Disney movie,” Hanks said after a scene of their first kiss played. (Hannah was semi-nude in the scene of the PG-rated, 1984 film.)

“The Da Vinci Code”:
“I changed my pants in front of the Mona Lisa,” Hanks revealed, noting how surreal it was to be filming at the Louvre in Paris.

“Charlie Wilson’s War”:
Acting opposite the late Philip Seymour Hoffman was “the most fun I’ve had” acting, Hanks said of the late performer.