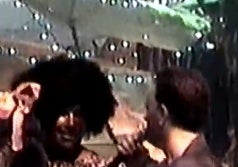 Fallout from a 2004 fundraising auction emceed by Tom Hanks continued Wednesday, as James Montgomery, the investment banker caught wearing blackface at the school event, apologized Wednesday for his costume.

“Each of us does and says things at one point or another in our lives we regret,” Montgomery told TheWrap. “The costume I wore to the 2004 Fundraiser was one such thing for me.”

Montgomery, who is CEO of the Santa Monica-based Montgomery & Co., said he did not intend to cause offense.

“While I can understand that some people may have read something other than what was intended into my wearing that costume to a costume party, as anyone who knows me would attest, that is not consistent with my beliefs nor is it with who I am,” Montgomery added. “I am sick about the false impression it gave. All I can do now is to do what I did then and apologize for any offense I may have caused.”

The footage was shot at a 2004 fundraiser for St. Matthew’s Parish School, the Pacific Palisades school where both Hanks and Montgomery had children enrolled at the time.

At one point in the video, Hanks jokes, “Ladies and gentlemen, a celebrity in our midst. Who would have thought that Bill O’Reilly would join us?”

Montgomery’s statement echoes one given by Hanks. The actor called the controversial video “hideously offensive.”

“In 2004, I was blindsided when one of the parents got up on the stage in a costume that was hideously offensive then and is hideously offensive now,” Hanks said in a statement to TheWrap. “What is usually a night of food and drink for a good cause was, regrettably, marred by an appalling few moments.”

The video came to light in a report on the Daily Caller. Eagles member Glenn Frey co-hosted the event.

A spokeswoman for Frey did not respond to requests for comment.