Tom Hanks has developed a bit of a habit of crashing weddings over the years. So, on Tuesday night, Seth Meyers got to the bottom of why exactly that is.

During his appearance on “Late Night” in support of “Elvis,” the actor was complimented by Meyers for being “a man of many hats.” But among those hats is being the guy who shows up weddings, “invited or not.” Hanks took the jab in good spirits though, explaining that he really doesn’t do it for the couples getting married, but for himself.

“It’s my ego, unchecked,” Hanks joked. “I just can’t help but think ‘What would these people like more than anything else to remember this magic day of days? Oh I know, me!'”

Meyers then took a moment to call up some of Hanks’ most famous wedding appearances, asking for an explanation on all of them. The first dated all the way back to the early 2000s, when Hanks was in Rome filming “Angels and Demons.” 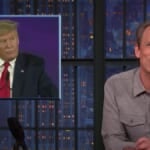 And, by Hanks’s recollection, that one was borne out of pure necessity, as their filming team had no idea that the Pantheon had booked a wedding on the same day, and he felt bad that they had gotten in the way.

“This limousine pulled up, and it was the bride and the groom trying to ‘get me to the church on time,'” Hanks said, bursting into song on that last line. “And they couldn’t do it because we had all this stuff going on. It was like ‘Uh, how do we fix this?’ So, like a stalker — you know, ‘Hey miss, miss, miss!’ — I knocked on the window, I said ‘Hey listen, we have a thing, but would you do me the honor of escorting you to your bridal altar?’ So we did it!”

Meyers then pulled up a more recent photo, in which Hanks jumped in with the bride and her bridesmaids. And well, that one was just about having fun.

“Rita and I, we were going out for a walk somewhere on our day off, and just as we were getting to our car, this wedding party was coming out to get into the biggest cocktail booze cruise bus I had ever seen,” he recalled. “I mean look, there’s like 47 — there are less Pittsburgh Steelers than there are bridesmaids in this photograph. And we said ‘Oh it looks like, oh, the matching dresses, it must be bridesmaids! Well if the bride comes out I’d jump out and take a picture.’ Well, she shows up, so yes, I crashed their wedding photo.”

The final photo Meyers pulled was one of Hanks actually marrying a couple. On that one, he wanted to be clear, he was just fulfilling a fan request.

You can watch Hanks’s full breakdown of his wedding crashing journeys in the video here and above. 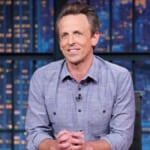 Also Read:
With ‘Corrections’, Seth Meyers Feels Like He’s Getting Away With Something