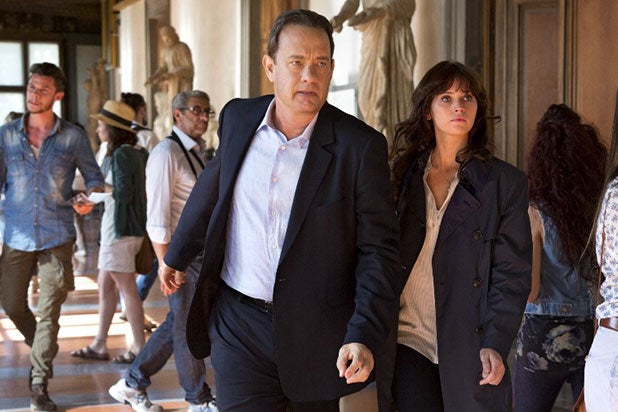 This weekend, it is set to earn $25 million — half of what its predecessor, “Angels and Demons,” made when it opened in 2009. However, the budget of “Inferno” was also half of what “Angels and Demons” was produced for. The first in the series, “The Da Vinci Code,” opened to $77 million with a budget of $125 million. Both of those films opened in the mid-summer blockbuster season, not on Halloween weekend.

In comparison, Hanks’ “Captain Phillips” opened to $600,000 for its Thursday previews, going on to earn $25 million its opening weekend.

Also Read: 'Inferno' Is 'Like a Bad Acid Trip,' and 9 Other Incendiary Reviews

Directed by Ron Howard, who helmed the past two films in the series, “Inferno” revolves around professor Robert Langdon’s desperate race to head off a global pandemic by using Dante’s “The Divine Comedy” to unravel a mystery.

The film also stars Felicity Jones and Irrfan Khan. It was produced by Howard and Brian Grazer and written by David Koepp, based on the novel by Dan Brown. Executive producers are David Householter, Dan Brown, William M. Connor, Anna Culp and Ben Waisbren.

Critics have offered up some highly flammable reviews for “Inferno,” giving the film a cumulative score of 20 percent on the review aggregator Rotten Tomatoes.

“Inferno” already crossed the $100 million milestone overseas in its first ten days. The only new wide release of the weekend is expected to easily beat returning titles “Boo! A Madea Halloween” and “Jack Reacher: Never Go Back.”