A photo of Bill Murray crying like a baby recently confused the internet because of his uncanny resemblance to Tom Hanks in the pic.

Even “Sully” star Hanks admits that he and the “Ghostbusters” comedian are lookalikes, as he said while appearing on “The Graham Norton Show” Thursday night.

“I’ve been doing a pale imitation of Bill Murray for most of my career,” Hanks said straight-faced. “I know that it’s not me — because I did not take that picture. That is not me.”

When Graham Norton argued that it really does look like him, the “Forest Gump” and “Castaway” star said, “I could make that face.” We don’t doubt it …

Norton was determined to demonstrate the strong comparison and pulled out an orange sweatshirt — which Hanks called a jumper to copy his host’s British lingo — for the actor to wear recreating the famous photo, as fellow guests Gemma Arterton played the child’s mother and Joseph Gordon-Levitt was cast as the crying baby.

Needless to say considering the acting accolades between the trio, they nailed it.

The original image belongs to Laura DiMichele-Ross, who originally posted it three years ago to her Facebook group called “Reasons My Son Is Crying” after meeting Murray on a golf course at St. Andrew’s in Scotland.

It was taken by Adam Ross, the Guardian reported, and shows Laura holding their crying nine-month-old son, Alexander, with Murray mimicking his tortured expression.

However, it soon sparked floods of comments asking if the infant was bawling over Tom Hanks, despite the caption clearly saying it was Murray.

Watch the video above and see the real photo below. 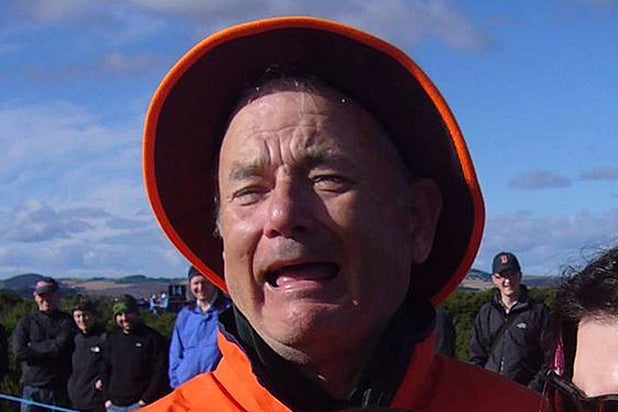