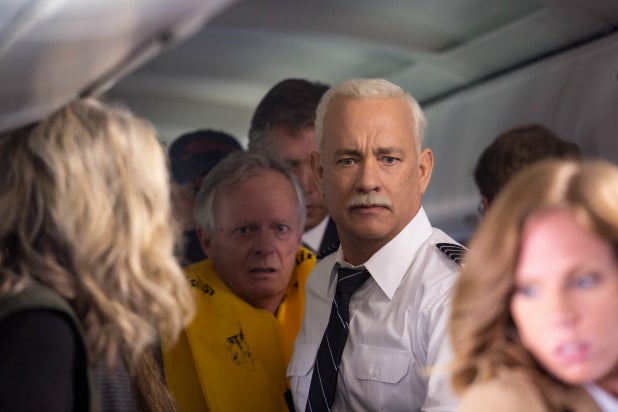 Critics are raving about Tom Hanks‘ new movie “Sully,” saying that it “truly soars” and calling it an “intense, harrowing, ultimately uplifting movie that deserves a wide audience.”

“Sully,” which now holds a score of 75 percent on Rotten Tomatoes, chronicles the famous plane landing into the Hudson River in 2009. Chesley “Sully” Sullenberger, the pilot of the US Airways Flight 1549, successfully landed the plane in the body of water with no fatalities after multiple bird strikes caused both engines to fail.

“‘Sully,’ an honest, skillful rumination on what makes a hero, is just one more example of how Eastwood, having directed movies only slightly longer than his protagonist had been flying planes, is still a masterful pilot himself,” wrote TheWrap’s film critic Robert Abele.

In their reviews, critics praised the directorial direction of Eastwood, who also successfully helmed “American Sniper,” starring Bradley Cooper, and “Gran Torino.” Hanks’ performance as Sully did not go unnoticed either, with critics saying Hanks was “appropriately cast” in the role.

See seven of the best reviews below.

“Clint Eastwood continues his remarkable run of late-inning successes with ‘Sully,’ a no-frills account of surprise hero Chesley Sullenberger. Told with documentary precision and an acute understanding of its characters, it is an intense, harrowing, ultimately uplifting movie that deserves a wide audience… While staying rooted firmly to its subject, ‘Sully‘ manages to say more about how we live than any Hollywood release this year.”

“An unabashed salute to real-life heroism, ‘Sully’ rivetingly recreates the daring 2009 emergency water landing in New York’s Hudson River executed by American airline pilot Chesley ‘Sully’ Sullenberger. As with his unlikely box-office smash ‘American Sniper,’ director Clint Eastwood decorates his protagonist with a noble crown that sometimes sits heavy on his head, and Tom Hanks gives the character a soft-spoken, conflicted dignity. Though not always as confident outside of the cockpit, ‘Sully’ mostly earns its crowd-pleasing, lump-in-your-throat sentiment.”

“‘Sully’ is an unabashed crowdpleaser about a hero fighting to maintain that title when corporate greed threatens to tarnish his image. There’s little crass audience manipulation in Eastwood’s depiction of the harrowing plane landing and the surprising investigation that followed – he’s the type of director who just gives it to you plain and simple.”

“And yet, it’s an effectively thrilling story of quietly unassuming, can-do American heroism — the kind, sadly, we don’t get to witness much these days. Which is to say, it’s the kind of vehicle that fits Hanks like a bespoke captain’s uniform. Hanks, now 60, ages himself for the role with the kind of heaviness the unsung carry. He erects an emotional wall to help channel the grace of a man who seems most comfortable not taking bows — a workaday American not asking for any special acknowledgment for merely doing what he considers his job, and doing it well. That’s a rare thing nowadays when everyone seems to be in a competition to see who can blow their own horn the loudest.”

“Frankly, while well acted and nicely paced, the NTSB storyline plays out somewhat predictably. Where ‘Sully’ truly soars is in Eastwood’s multiple depictions of the landing itself. Todd Komarnicki’s screenplay smartly teases a complete revelation of what occurred by cutting back to different moments during the incident as the NTSB plotline unfolds.  For instance, Manhattan office workers jaws dropped as they the low flying plane cross over the city (evoking memories of Sept 11th that don’t need to be spoken). The cabin crew chanting at passengers ‘heads down, stay down.’ Sully and Nichols surprised by the birds and immediately realizing something is very wrong. These moments all build to the final sequence that will have audiences catching their breath.”

“With ‘Sully,’ Clint Eastwood digs behind that astonishing visual, providing a compelling assessment of the eerie moments leading up to it. With Tom Hanks appropriately cast as good-natured Sully, Eastwood delivers an earnest, straightforward look at the way the captain’s professionalism saved the day. But while that aspect of the movie hits more than a few obvious notes, the crash is the real star of the show.”

“‘Sully’ is about a hero, and a story that enthralled a nation desperate for good news, but it’s more about that intangible human element. Good people doing their jobs thoughtfully and at the height of their abilities, working together under unprecedented and extraordinary circumstances. Sometimes all of those things come together to create a miracle, and ‘Sully’ is a warm reminder of that.”