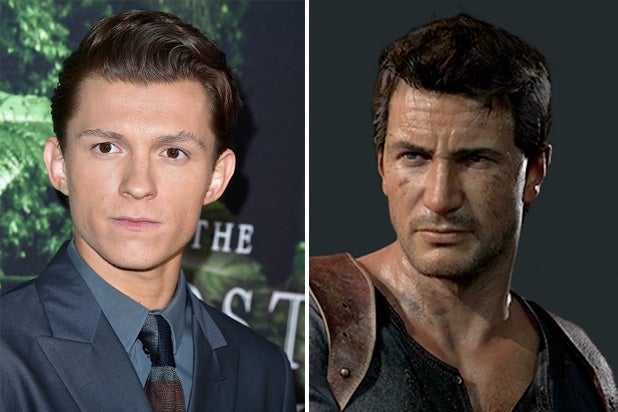 Tom Holland gave a first look of himself as Nathan Drake on set for the “Uncharted” movie adaptation of the Naughty Dog video game franchise.

Holland may be playing a younger version of the Indiana Jones-like adventurer Nathan Drake, but he’s got the look down, emulating the khaki attire and leather holster from the “Uncharted” games beautifully.

“It’s nice to meet you, I’m Nate,” the “Spider-Man” actor said in a tweet from Thursday.

Holland even got to meet the “real” Nathan Drake on set for the film in Germany, speaking with actor Nolan North, who has voiced Drake in four “Uncharted” games dating all the way back to 2007, with North and Holland “leaking” some photos from the set.

“Like looking into a mirror! Proud to have @TomHolland1996 continuing the Drake legacy! Absolutely smashing it! Thanks for the set visit,” North said in a tweet Thursday morning.

“Find someone who looks at you the way Nate looks at Nate,” the game studio Naughty Dog chimed in.

“Uncharted”is directed by Ruben Fleischer and co-stars Mark Wahlberg as Nate’s partner in crime Victor “Sully” Sullivan and is in theaters on July 16, 2021 after originally being delayed from a release this year. Also starring in the film from Sony are Antonio Banderas, Tati Gabrielle and Sophia Ali.

The movie is a prequel to the events of the games, which feature Drake as an ancestor to Sir Francis Drake as he explores lost cities, hunts historical treasure and maybe encounters not just an army of bad guys looking to make a power grab but maybe some supernatural forces along the way. The games have become known for their cinematic style and quick-witted dialogue, much of it courtesy of the smarmy Nathan Drake.

See Holland as Nathan Drake below and a photo of him along with North.

Like looking into a mirror! Proud to have @TomHolland1996 continuing the Drake legacy! Absolutely smashing it!
Thanks for the set visit!!@unchartedmovie pic.twitter.com/sfiFYUJVyH

Do you think Sony would be pissed if I spontaneously uploaded a first look picture. I got Nolan’s approval so I guess they can’t fire me now. https://t.co/Ie99tKLha4