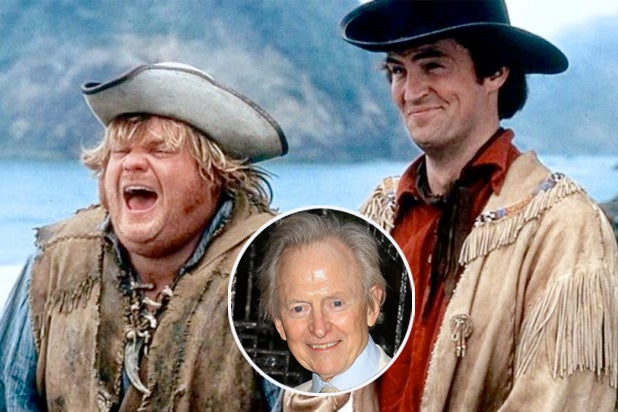 Film fans might have been puzzled scanning IMDb on Tuesday after the death of Tom Wolfe, the beloved author of nonfiction and fiction best-sellers like “The Right Stuff” and “The Bonfire of the Vanities” that were adapted into memorable Hollywood movies.

The movie site listed Wolfe, who died Monday at age 87, as the co-screenwriter of the 1998 Chris Farley-Matthew Perry comedy “Almost Heroes” along with Mark Nutter and “Fuller House” co-executive producer Boyd Hale.

But no, the famed paragon of New Journalism is not the same Tom Wolfe who co-wrote Farley’s last movie, which has an abysmal 8 percent on RottenTomatoes despite a starry ’90s cast and director Christopher Guest.

“Not sure why I was ever credited on ‘Almost Heroes’ as Tom Wolfe,” veteran TV writer Tom Wolfe told TheWrap Tuesday via email, explaining that most of his other credits are listed under the name Thomas R. Wolfe. “I have mostly written in TV with my wife, Barbara Wallace.”

Reps for IMDb did not respond to requests for comment.

Also Read: Tom Wolfe, 'The Bonfire of the Vanities' Author, Dies at 87

IMDb is not the only outlet that has confused its Wolfes. Thomas R. Wolfe remembered a call he received when he and his wife were working on the short-lived CBS sitcom “Welcome to New York” in 2000: “Someone asked if I was THE Tom Wolfe. I said no. The caller thanked me and hung up. A few seconds later he called back and said, ‘Do you have the other Tom Wolfe’s number?'”

A few years later, he received an offer from The Paris Review to write an essay. “I called them back and told them they had the wrong Tom Wolfe,” he said. “I wish now I had written the essay and found out what they thought of my writing.”

Few fans of the more celebrated Tom Wolfe would suspect he’d have any connection to “Almost Heroes,” a period adventure comedy about rivals of explorers Lewis and Clark that grossed just $6 million and earned a rare F grade from Entertainment Weekly critic Owen Gleiberman.

“It’s as bad as any comedy I’ve seen in the post-‘Animal House’ era, right down there with the worst of Dan Aykroyd and the scripts Pauly Shore must have turned up his nose at,” Gleiberman wrote.

According to the 2009 oral history “The Chris Farley Show,” Wolfe was a young comedy writer and professional partner of Nutter, whose credits at the time included “Saturday Night Live” and the ’90s sitcom “Nurses.”

“Tom Wolfe and I were working on a sitcom with our third partner, Boyd Hale,” Nutter said in the book. “Boyd came up with the original concept of a Lewis and Clark comedy; the ideas flowed freely from there.”

But despite what producer Denise DiNovi called a “brilliant” script, the finished film became a notorious posthumous flop for Farley.

“I thought so many times about what went wrong,” DiNovi said in the book. “I always like to say I have the distinction of making the only unsuccessful Christopher Guest movie.”

The more famous Tom Wolfe had no direct role in the two more noteworthy Hollywood adaptations of his work. 1983’s “The Right Stuff,” about the early days of the American space program, won critical raves and four Oscars.

Brian De Palma’s 1990 adaptation of “The Bonfire of the Vanities,” meanwhile, was a notorious flop — though its 16 percent RottenTomatoes score still tops that of “Almost Heroes.”

For the record: A previous version of this story incorrectly identified Mark Nutter.