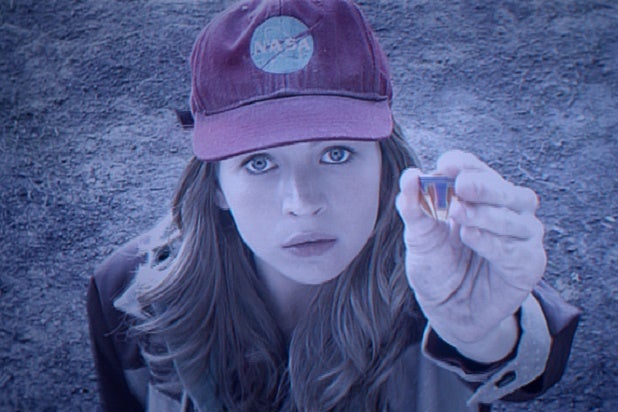 When Disney’s braintrust set its original sci-fi movie epic “Tomorrowland” for the Memorial Day weekend, it’s doubtful they gave much thought to the Barden Bellas of “Pitch Perfect 2.”

But director Brad Bird and Damon Lindelof, the team that conceived “Tomorrowland,” have probably gotten their fill of the saucy a capella singing team led by Fat Amy and Beca — that’s Rebel Wilson and Anna Kendrick, for the aca-uninitiated — at the center of Universal s musical comedy.

On Sunday, “Tomorrowland,” the $150 million sci-fi saga inspired by the utopian dreams of Disneyland founder Walt Disney and one of its park rides, was pulling away from “Pitch Perfect 2” after the two movies went into Saturday neck-and-neck. The sprawling adventure starring George Clooney, Hugh Laurie and Britt Robertson was heading for a $41 million triumph over the long holiday weekend. The reigning champ Barden Bellas were just behind at roughly $39 million and have pushed their domestic haul to $125.4 million in ten days, nearly double the original film’s final total, and their global grosses to $187 million.

The Tom Hardy-Charlize Theron road rage revival “Mad Max: Fury Road,” the blockbuster “Avengers: Age of Ultron” and the weekend’s other wide opener, MGM and Fox’s “Poltergeist” remake, were all bunched behind the leaders and heading for around $30 million.

It was a competitive but subdued Memorial Day weekend at the box office, with ticket sales down roughly 20 percent from last year, when Fox’s superhero saga “X-Men: Days of Future Past” dominated with a $110 million triumph.

The audience for the PG-rated “Tomorrowland” was about even in terms of gender and skewed older with 60 percent of the crowd over the age of 25. They gave the film a “B” CinemaScore and liked it more than the critics, who have it at 50 percent positive on Rotten Tomatoes.

“It’s less than we were hoping, but when you decide to take a risk with an original story and a new intellectual property, it comes with a trade-off in the lack of pre-awareness,” Disney distribution chief Dave Hollis told TheWrap Sunday.

This release date could have a positive impact over the next few weeks, as “Tomorrowland” will be the only PG-rated movie in the marketplace until Disney rolls out Pixar Animation’s “Inside Out” on June 19.

“We’ll be the family option until then, so we’ll wait a little bit to pass judgment,” said Hollis.

The marketing campaign for the film centered on mystery and “Box 52,” a forgotten container supposedly found by workmen in a studio basement containing Disney relics and photos that Bird and Lindelof said inspired the film. That piqued curiosity and was fun but may have limited the opening by leaving the film’s subject matter unclear to some.

“Our campaign was inspired and most consumers loved the mystery angle, but that comes with a risk, too, and awareness will build,” said Hollis. “We need time to breathe.”

Launching an original film was a point of pride for Disney, said Hollis, and practicality.

“While not suggesting this is going to change the whole landscape, it is important for the industry to tell original stories. We can’t just produce franchises and sequels,” he said.

The PG-13-rated horror remake “Poltergeist” was just such a sequel, and comes 33 years after the original creepy classic. If it does finish with around $3o million for the four days, it will have come in above the expectations of most analysts as well as MGM and Fox.

It will be on the path to profitability too, since the production budget for the Gil Kenan-directed remake starring Sam Rockwell and Rosemarie DeWitt is a moderate $35 million.

“Avengers: Age of Ultron” is expected to cross the $400 million threshold at the domestic box office on Sunday, joining “The Avengers” and “Iron Man 3” to become the third Marvel Cinematic Universe film to do so for Disney. It is the highest grossing film of the year domestically and internationally.

“Mad Max: Fury Road” held very well in its second week, losing just 37 percent of the audience from its strong opening last weekend for Warner Bros. The R-rated action sequel written and directed by George Miller, who did the same for the original starring Mel Gibson, should hit $1o0 million domestically early next week and has taken in$126 million from overseas.

“Far From the Madding Crowd,” another remake of an older film — the original with Julie Christie and Alan Bates came out in 1967 — went from 576 to 865 theaters and will bring in $2.8 million in its fourth week for Fox Searchlight. That puts the domestic total for the Tom Vinterberg-directed drama starring Carey Mulligan and Matthias Schoenaerts at $6 million.