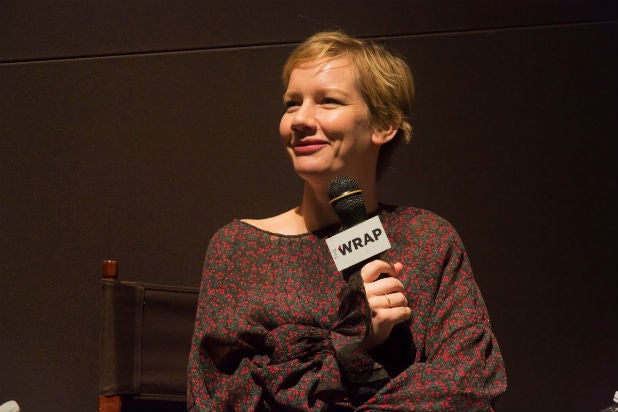 In her most famous torch song, “The Greatest Love of All,” the late Whitney Houston sings of children being the future and that no matter what they take from her, “they can’t take away my dignity.”

But in “Toni Erdmann,” the stellar German entry for Best Foreign Language Oscar, dignity is hard won for a daughter dealing with an unexpected visit from her father — an extreme prankster who forces her to reevaluate her joyless life.

It’s in “Erdmann” that Sandra Hüller, who plays the daughter-in-question Ines, gets to sing that Whitney song in front of group of puzzled strangers. It comes as one in a series of embarrassments orchestrated by her dad (Peter Simonischek).

“I totally got the scene wrong in the first place, I have to admit,” Hüller said Tuesday night at a Q&A for the film as part of TheWrap’s Awards Screening Series. “I thought Ines was giving up, that she would sing it and not care — but it [turned out] boring.”

Director Maren Ade, who, along with her star and film became the darling of this year’s Cannes Film Festival, reminded the actress of something important: she’s not defeated, she’s fighting for her life.

“Maren reminded me of a version which was much bigger and ironic — Ines is competing with her father in that moment. We rehearsed the song a lot to find the right key, I can’t sing in Whitney Houston’s key — that is impossible,” she said.

What was the key to getting her show-stopping version on screen?

“Maren also took me to a karaoke bar to sing it in front of people I didn’t know,” Hüller said.

In the film, Ines is a stuffy corporate consultant in Bucharest. Her father is a ne’er-do-well retired school teacher who descends on her work and home life, horrified by its efficiency and soulless pursuit of success.

Sparing you some beautiful moments of public humiliation, and a few tear-inducing moments of self-realization, the movie culminates at Ines’ birthday brunch. Fumbling to put on her militant cocktail dress and fasten silly wedge shoes, “she gives up,” Hüller said.

Ines strips off all her clothes and answers the door naked. She tells her guests (mostly coworkers) that it’s a team building exercise. She’s done pretending.

“There were so many things to consider in that scene,” Hüller said. Indeed, several partygoers refuse the dress code, but a few accept. And there’s a lot more to discuss than the salmon and mini-quiche spread.

“It’s a challenge in any way to act as though nothing is wrong. That’s probably the point of the scene, to act as if [no one was naked],” she said.