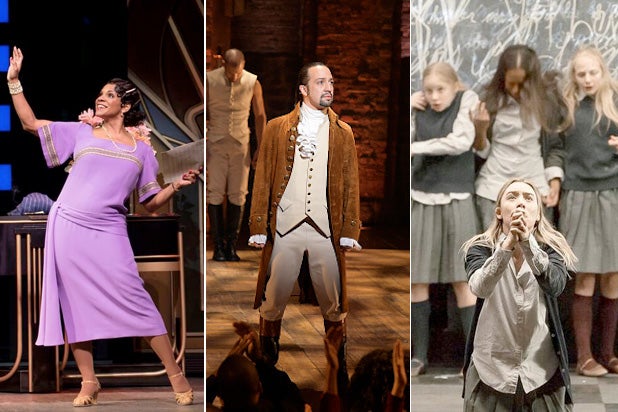 The big question to be answered on Tuesday is not how many Tony nominations “Hamilton” will nab. It’s how many will have Scott Rudin‘s name on them.

Broadway loves a show that makes that rare crossover from the theater world into the public consciousness, and usually awards them with lots of Tonys. Think “A Chorus Line,” “The Producers,” “The Book of Mormon,” and now “Hamilton.”

Rudin represents a much rarer narrative. He is the mega theater producer who spread it around this season, having a good shot to get all six of his shows nominated in three of the four big categories: “Shuffle Along” (original musical), “The Humans” and “King Charles III” (original play), and “Blackbird,” “The Crucible,” and “A View from the Bridge” (revival of a play).

Of those shows, only “King Charles III” did not have Rudin as its lead producer. He would have had a title up for best revival of a musical but for the fact that the Tony administrative committee rejected his petition to put “Shuffle Along” in that category.

I, for one, am very disappointed that “Shuffle Along” is not being nominated as a revival. Don’t get me wrong: The show, which offers a behind-the-scenes look at the 1921 musical of the same name with an entirely new book, should be considered an original musical.

I just wanted to see what that fourth nominee would be for best original musical if Rudin had gotten his way. “American Psycho” might have a shot, if for no other reason than a tuner about a serial killer is so different from what the tepid “Bright Star,” “On Your Feet,” and “Tuck Everlasting” have to offer.

Speaking of those unexceptional scores, Philip Glass deserves a nomination for his hypnotic “Crucible” music. Occasionally, Tony looks to a play when the original musicals are this weak.

Listed below are my guesses at the likely nominees in the top categories. I don’t know any of the Tony nominators, who meet on Monday, and my hunches are based purely on the buzz. Nor do they reflect my personal favorites.

The Tonys tend to acknowledge the most acting rather than the best acting. I hope I’m wrong, but I don’t expect the nuanced, subtle performances given by any of the following lead actors to be mentioned on Tuesday: Zachary Levi (“She Loves Me”), Clive Owen (“Old Times”), Kelly Reilly (“Old Times”), or Ben Whishaw (“The Crucible”).

When it comes to directors, I admit to preferring the more-is-more approach. In my mind’s eye, I already see the perfect, traditional, conservative staging of a classic play or musical. I enjoy being surprised, which is why I would like to see but highly doubt that Douglas Hodge will be nominated for “Old Times.” Ivo van Hove will be nominated for “A View From the Bridge,” but his subtler work on “The Crucible” might be overlooked. Van Hove can do no wrong.

Then again, when it comes to a great new play like “The Humans,” I’m very happy that Joe Mantello did not set it in the future in another galaxy.

And the predictions are….

Play: “Eclipsed,” by Danai Gurira; “The Father,” by Florian Zeller; “The Humans,” by Stephen Karam; and “King Charles III,” by Mike Bartlett.

Musical: “Hamilton,” “School of Rock,” “Shuffle Along,” and “Waitress.”

Actress in a Musical: Laura Benanti (“She Loves Me”), Cynthia Erivo (“The Color Purple”), Audra McDonald (“Shuffle Along”), Jessie Mueller (“Waitress”), and Ana Villafane (“On Your Feet”).

Revival of a Musical: “The Color Purple,” “Fiddler on the Roof,” “She Loves Me,” and “Spring Awakening.”

Revival of a play: “Blackbird,” “The Crucible,” “Long Day’s Journey into Night,” and “A View From the Bridge.”

Director of a musical: John Doyle (“The Color Purple”), Scott Ellis (“She Loves Me”), Thomas Kail (“Hamilton”), and George C. Wolfe (“Shuffle Along”).