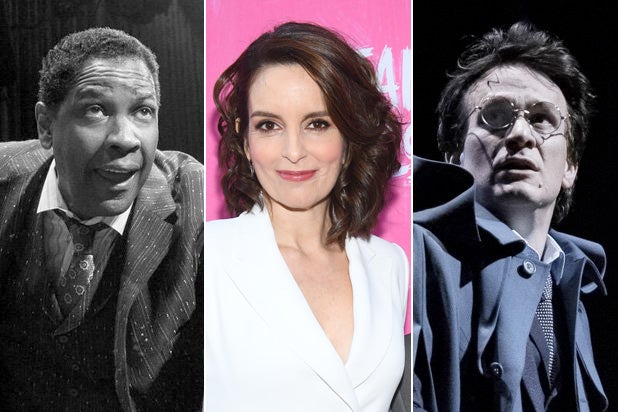 The 2018 Tony Awards are Sunday night, so let’s take a look at the nominees and who we think will go home with the gold.

The award nomination had boosted ticket sales for Best Musical contender “The Band’s Visit” — but “SpongeBob SquarePants,” Best Musical Revival contender “Once on This Island” and even “Angels in America” all seem to be in the box office doldrums.

Otherwise, except for pumping up premium-price ticket sales, the nominations don’t make a whit of difference to such certified hits as the movie-based musicals “Frozen” and “Mean Girls” or the starry plays “Harry Potter and the Cursed Child,” “The Iceman Cometh” and “Edward Albee’s Three Tall Women.”

Egos are a completely different story. Who will win, as opposed to who should win, should fuel conversations at Joe Allen until the winners are announced June 10 at Radio City Music Hall and broadcast live on CBS.

Who won and lost last year? I’d have to look it up.

Regarding 2018, a few shows and individuals appear to have a lock that is very much deserved. They include “The Band’s Visit” (best musical), “My Fair Lady” (best revival of a musical), Glenda Jackson in “Three Tall Women” (best actress in a play), Denzel Washington in “The Iceman Cometh” (best actor in a play) and Nathan Lane in “Angels in America” (best featured actor in a play).

Elsewhere, there is controversy. I prefer “The Iceman Cometh” over the likely winner for best revival of a play, “Angels in America,” and Lucy Kirkwood’s “The Children” over the undisputed favorite for best play, John Thorne’s “Harry Potter and the Cursed Child.”

In two major categories, it could go either way. I predict that Tony Shalhoub (“The Band’s Visit”) and Lauren Ambrose (“My Fair Lady”) will win for best leads in a musical, despite the Drama Desk somehow forgetting to nominate this year’s wonderful Eliza Doolittle.

But in a case of musical chairs, Tony voters might instead choose Harry Hadden-Paton (“My Fair Lady”) and/or Katrina Lenk (“The Band’s Visit”).

Norbert Leo Butz (“My Fair Lady”), also ignored by the irrelevant Drama Desk this season, would be a shoo-in for best supporting actor in a musical, but he’s already got two Tony Awards, leaving the contest open to the never-nominated veteran Alexander Gemignani (“Carousel”). The snub for Tony Yazbeck (“Prince of Broadway”) in this category is something of a disgrace, as is not recognizing Kate Rockwell (“Mean Girls”) for featured actress in a musical.

The contest among featured women in a musical now stands between Ashley Park (“Mean Girls”) and Lindsey Mendez (“Carousel”), with Park having the slight edge. The nomination of Renee Fleming (“Carousel”) could split Mendez’s vote.

Also Read: 20 Stars Who Need Only a Tony to EGOT, From Julie Andrews to Kate Winslet (Photos)

Denise Gough (“Angels in America”) will win for best supporting actress in a play, but Deborah Findlay (“The Children”) is the performance I won’t ever forget. Frankly, Findlay should have been nominated in the lead category.

The star power of Tina Fey (“Mean Girls”) will bring her the Tony for best book of a musical. Itamar Moses (“The Band’s Visit”) should win, but theatergoers, as well as the rank-and-file Tony voters, want something splashier than Moses’s chamber piece.

How will the Tony telecast handle Fey’s potential win? Tonys for book and score are generally given out pre-telecast, but for Cyndi Lauper (“Kinky Boots”) in 2013, they moved the best score honors into primetime. Look for similar high exposure this year, thanks to Fey.

David Yazbek (“The Band’s Visit”) will win for best score. Unlike the book-nominee race, there’s no real competition here.

George C. Wolfe (“The Iceman Cometh”) should win for best director of a play, but the Tony is likely to go to John Tiffany (“Harry Potter”) instead.

More interesting is the contest for best director of a musical. My coin flip gives it to the deserving Bartlett Sher (“My Fair Lady”), but a case can be made for either Michael Arden (“Once on This Island”) or Tina Landau (“SpongeBob”).

Usually, the Tony goes to the director of great material. But last year it went to Christopher Ashley (“Come From Away”), the talented director of a second-tier musical. Landau and Arden perform similar magic with distinctly mediocre material, their work being the only reason to see either “SpongeBob” or “Island.” Regardless, I’m betting the Tony goes to Sher, despite conservative backlash to his #MeToo ending for “Lady.”