They say don’t meet your heroes, so beating your heroes is probably ill-advised as well — unless you’re dealing with skateboarding legend Tony Hawk. Brazilian skateboarder Gui Khury did just that at the 2021 X Games, becoming the youngest gold medalist in the competition’s 27-year history and earning major props from his childhood idol.

On Friday night, 12-year-old Khury made X Games history by landing a 1080 turn on a vertical ramp, winning the Vert Best Trick contest. Khury beat out eight other competitors, including Hawk himself.

Watch Khury pull the incredible move and earn a congratulatory embrace from the skate legend here. 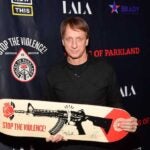 The video shows a tearful Khury receiving a hug and a fist bump from Hawk as well as his other competitors.

Despite their 41-year age difference, Khury and Hawk were, in fact, competing in the same category. During training, Khury had landed a 1080, which requires the skater to make three full turns while in the air, but he never did it during a competitive event.

Coincidentally, Khury’s amazing X Games showing comes 22 years to the day after Hawk became the world’s first skateboarder to land a 900 at the contest. This year’s X Games mark the first time the 10-time gold medalist has competed since 2003, which he decided to do less-than an hour before the competition began. 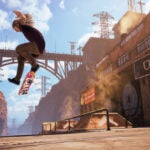