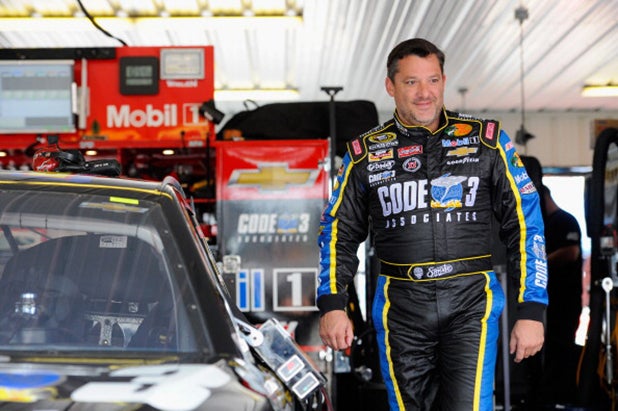 Tony Stewart will not compete in Sunday’s NASCAR Sprint Cup race at Watkins Glen International after he was involved in a fatal crash that claimed the life of another driver in upstate New York hours earlier, Stewart’s racing director Greg Zipadelli said early Sunday.

Kevin Ward Jr., 20, was struck and killed Saturday night when he lost control, got out of his car and was standing on the dirt track, Ontario County Sheriff Philip Povero said in a statement obtained by TheWrap.

As Ward stood outside of his vehicle, two cars approached him. “The first car swerved to avoid the driver out on the track. The second car, operated by Tony Stewart, struck the driver,” the statement said.

The incident happened at about 10:30 p.m. at the Canandaigua Motorsports Park, during the Lucas Oil Super Sprint Feature race. Ward was “transported to the F.F. Thompson Hospital where he was pronounced deceased at 11:15 p.m.,” the Sheriff’s Department said.

The track is about two hours from Watkins Glen International race track, where Stewart had been scheduled to race on Sunday.

The decision was an about-face for Zipadelli, who earlier told reporters that Stewart would indeed take part in Sunday’s competition.

“We gave Tony some time to sleep on it. He feels strongly this is the right thing to do,” Zipadelli said.

“Our hearts go out to Kevin’s family,” Zipadelli added. “This is a very tough, very emotional time for everybody — his family, our family at Stewart-Haas Racing.”

Regan Smith will replace Stewart in Sunday race, according to Zipadelli.

The Sheriff’s department said Stewart “has cooperated with the investigation, which is ongoing.” Officials also asked anyone with video of the collision to contact them at 585-394-4560.

Editor’s note: A warning – the YouTube video below contains a graphic account of the tragic accident and may not be suitable for viewing by all readers.