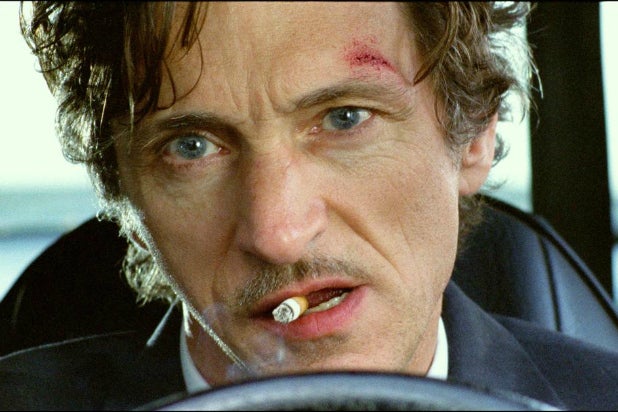 A grizzled private eye, the underbelly of Los Angeles and elaborately long takes in grainy Techniscope 35mm form the aesthetic backbone of “Too Late,” writer-director Dennis Hauck’s extended cinematic wink for movie-movie lovers. This small, committed indie, simultaneously reverent toward and eager to one-up the likes of Tarantino, Scorsese and De Palma, has its share of ill-conceived moments and amateurish filmmaking, but as a swing-for-the-fences effort with a smattering of genre charm, it fully earns its inevitable destiny as a midnight movie curio.

She’s not missing in the first scene, however, set in the tree-lined Radio Hill gardens that offer a view of downtown L.A. We’re introduced to Dorothy as she interacts with a pair of hiking movie nerds (Rider Strong and Dash Mihok), flirts with a voyeuristic park ranger (Brett Jacobson) and awaits a meeting with Sampson. Over 20-plus unbroken minutes, cinematographer Bill Fernandez’s camera cranes, pans, pivots and zooms (all the way to a Chinatown balcony where Mel answers Dorothy’s phone call), forming overhead shots, two-shots, split screens and close-ups in a bravura piece of one-take choreography.

Though the arch dialogue and pop culture thematic references (Dorothy wearing a red hood, eating an apple, nods to “The Wire” and L.A. repertory cinema The New Beverly) occasionally produce winces, it’s still a legitimately dazzling way to kick things off. Especially considering the instant nostalgia that light-exposed celluloid now creates. (“Too Late” is being released exclusively in 35mm, a bold gambit in this era of digital-only cineplexes.) 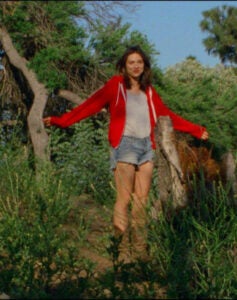 The movie’s following four acts are 20-minutes-plus single takes as well, and therein lies the central problem with fully enjoying a technical experiment like “Too Late”: Even meta-bravura needs a rest every now and then. (Hauck admits in the press materials to committing to the one-shot stunt before settling on a story.) This overextension is never more apparent than the next scene/shot, haphazardly captured in the Hollywood hills enclave of a corrupt club owner (Robert Forster) as Sampson arrives to confront him — it’s a near-total mess.

The owner’s crying wife (Vail Bloom) is bottomless for much of it, as if to outdo Julianne Moore‘s pants-less scene in “Short Cuts,” and the dialogue (barely audible over the scene’s loud party music) strains to justify the roaming-camera mantra. A later scene at a drive-in that mixes staginess, self-referential nods (it starts and ends between literal reel changes of “Carnival of Souls” in the projection booth), hard-boiled overacting and violence too often pulls you right out of the story, which by this point Hauck has chronologically jumbled.

But when things settle down, and performance is accentuated, Hauck finds an appealing balance between the spark of a mysterious encounter between strangers and the trappings of fate so to noir, and why an uninterrupted shot can be a thrilling way to convey that. The middle act, which starts with Sampson in gumshoe mode at a strip club and ends in a bar down the street — with Hawkes taking up a guitar to sing a plaintive tune — achieves a moody after-hours grace. Also effective is a final confrontation between Sampson and Dorothy’s mother (Natalie Zea) and grandmother (Joanna Cassidy), made effectively revelatory thanks to Hawkes’ finely tuned, weary empathy and Zea’s charged portrayal.

Despite its stylistic overreach, “Too Late” is certainly more alive as a filmmaking calling card than a lot of the undercooked indies that take advantage of the digital world’s economy of production at the expense of directorial forethought and/or flair. And as love letters to L.A. go, Hauck’s appreciation for a landscape that sparked a million cracked dreams is evident in his underused but cannily skyline-adjacent locations.

And if the single-shot gimmick isn’t always effective, the unmistakable visual qualities of a waning cinematographic medium still makes for a powerful argument to see “Too Late” in a theater, before it’s … well, you know.