Bounty hunters and viral bar codes aren’t exactly Hollywood’s usual way of marketing a movie. But Universal is banking on some extreme measures to promote this weekend’s "Repo Men."

Jude Law and Forest Whitaker star in the film as two gun-packing heavies who repossess the artificial organs, or artiforgs, of defaulting customers by any means necessary. With "wild postering" campaigns and a $30,000 contest turning fans into real hunters and runners, the studio is taking the same anything-goes approach. 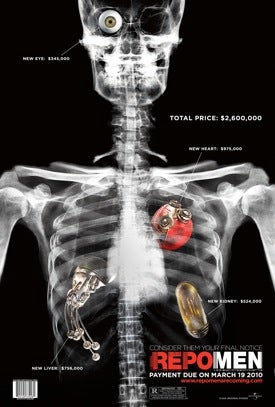 Working with an estimated $30 million promotional budget, the approach is all about full immersion in the dsytopic world of “Repo Men,” which ironically comes out the same day as Jennifer Aniston and Gerald Butler’s “The Bounty Hunter.”

“This was a perfect scenario to try an unconventional marketing tactic with a unique mobile extension that tied directly to the theme of the film,” Universal’s digital marketing manager Ben Blatt told TheWrap. “We decided to go after the tech-savvy young male that is a major part of the demo for this film.”

To start with, the studio set up a website featuring eerie authentic-seeming ads for the Union — the company that sells the organs in the movie. That done, the studio took the movie to the streets.

“This was a perfect scenario to try an unconventional marketing tactic with a unique mobile extension that tied directly to the theme of the film,” Blatt said.

The first attack was a poster campaign.

In the movie, the artiforgs are all bar-coded; Repo Men hunt down delinquent customers and scan their bodies to see if their payment has been made. If not, they throw the customer to the floor, take out the organ and return it to the company. 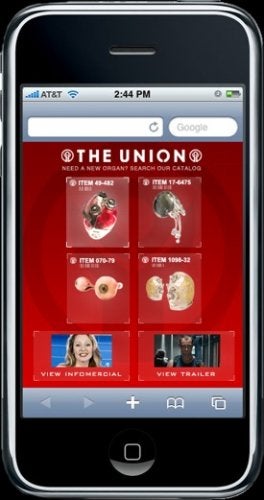 Working with ad agency 360i, bar-coded posters (pictured above) were placed on walls and construction-site fences in the top 15 markets across the country. Fans of the movie were let in on the gimmick in a viral campaign that included hints scattered on the web, in chat rooms and on a series of artificial sites like the one for the Union.
Using a Red Laser iPhone app (a bar code scanner that uses its built-in camera), fans could scan the bar code on the poster and instantly learn more about the movie, as well as the fictional world surrounding it.
Then, last month, launching off a theme in the film where Law goes on the run from the very company for which he used to retrieve organs, Universal started a manhunt of its own.
Films like “The Dark Knight,” “The Watchmen” and the upcoming “Tron” sequel all have experimented with flash mob-type activities to engage their fan base directly. But none have gone quite this far.
Working with Wired magazine, the studio created an Artificial Reality Game contest, in which fans could register either as Repo Men themselves, or they could apply to be one of four runners, whom the Repo Men had to track in the real world.
The prize: Each Repo Man who captures one of the four runners will win $7,500.
Clues were sent out virally, online and via Twitter; potential runners and trackers would register at Wired.
“There are about 3,000 registered hunters after the $7,500 prize,” Doug Neil, senior VP for digital marketing at Universal, told TheWrap.
Part of the appeal of the hunt is time and place, says one of its creators. “The promotion really hit at a perfect time,” asserts Mike Sellinker of Lone Shark Games, “if you can call a crumbling economy with a healthcare crisis perfect for anything.”
Lone Shark was approached by Universal to orchestrate the “Repo Men” hunt after having put together a similar effort to track down Wired writer Evan Ratliff when he pretended to vanish late last year for a story on how hard it is for a person to disappear.
It was 25 days before he was found, near New Orleans.
Universal chose the four runners — Alex Gamble, Will LaFerriere, Usman Akeju and Ciji Thornton — from hundreds of applicants. They hit the road on Feb. 25 with $2,500, their artiforgs, a GPS device and 30 days to complete a set of public tasks and challenges.
Once a runner is found, identified and told “You’ve been repo’d,” he’s out of the game.
After just over 10 days, that’s what happened to Akeju and Thornton on March 9 in Greenbelt, Maryland. The duo, who had taken to traveling together, were “repo’d” by an enterprising Maryland twentysomething, Kate Majewski, at a skate park.
And Majewski nearly didn’t collect her runners or her $15,000 because several other hunters were around the rink and moving in for the capture at the same time.
“This has happened all over America,” Lone Shark’s Sellinker told TheWrap. “Wherever there’s been solid intel on the runners’ locations, there have been hunters ready to jump on them.”
With two runners on the loose, more of that intel was released Monday at a screening of the film at South by Southwest, where the studio distributed a prequel motion comic full of embedded clues.
Runners who make it 30 days without being caught take the $7,500 prize.
For some, the selling of “Repo Men” is a distinctly dangerous game that runs the risk of information overload.
“All you need is one fan, one hunter, to blur the line between reality and fantasy on a campaign like this,” said a senior NYC-based branding consultant who has worked closely with a number of studios on major releases, “and things could quickly get ugly. Let’s not forget the lessons of Abu Ghraib.”
Universal’s Neil admits there is a dark side to the game, that there is "something unsettling about going on the run.”
But, he adds, “That is the world of ‘Repo Men.’ Also, we have clear rules to participate and what we have found is that the hunters are respectful and self-regulating and, knock on wood, we’ve had no issues so far.”
x