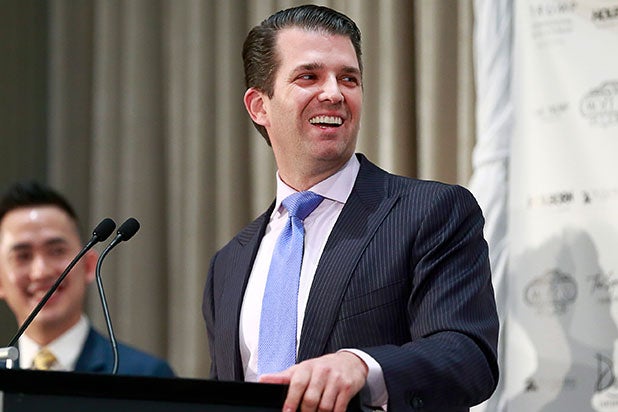 Media members all over the country are talking about a recent New York Times story in which the publication reported that Donald Trump Jr. received an email informing him he would receive damaging information about Hillary Clinton as part of Russian government effort to aid his father’s candidacy.

Trump Jr. released the email chain on Tuesday in wake of the report.

“This is moving into perjury, false statements, and even potentially treason,” Sen. Tim Kaine told CNN, while ethics lawyer Richard Painter told MSNBC on Monday that the situation “borders on treason, if it is not itself treason.”

On Monday evening, the New York Times published a story claiming that President Trump’s eldest son was told in an email that a June 2016 meeting with a Kremlin-linked lawyer would deliver intelligence to aid his father.

The message indicated that the Russian government was the source of the potentially damaging information against Clinton. However, there is no evidence to suggest that it was related to the Russian hacking that resulted in the release of thousands of Democratic emails a week after Trump Jr.’s meeting.

On Tuesday, Trump Jr. blew off the report on Twitter, tweeting, “Media & Dems are extremely invested in the Russia story. If this nonsense meeting is all they have after a yr, I understand the desperation!”

“I mean I guess it runs in the family, to go on Twitter when he is clearly in legal jeopardy,” said “Morning Joe” host Joe Scarborough.

See the top 5 reactions to the email below.

“Morning Joe” took a break from bashing President Trump on Tuesday to shift attention over to his eldest son.

“How stupid of Don, Jr.,” said host Joe Scarborough while discussing the latest developments, which dominated the first hour of MSNBC’s morning show.

Sen. Kaine told CNN that in terms of the ongoing Russia investigation, “we’re now beyond obstruction of justice in terms of what’s being investigated. This is moving into perjury, false statements, and even potentially treason.”

Ethics lawyer Richard Painter told MSNBC on Monday that the situation “borders on treason, if it is not itself treason.”

“The Bush Administration never would’ve tolerated this,” Painter, who served as George W. Bush’s White House ethics lawyer, said. “We should not treat this lightly. “

Richard Painter, Bush 43 Chief Ethics lawyer, to @MSNBC on the Don Jr. meeting: "This borders on treason, if this is not treason itself." pic.twitter.com/I0Y31hHI3t

On Monday, Rachel Maddow shared the breaking news of the New York Times report on MSNBC, where she proceeded to read the lead of the story “just to put the cherry on top of this.”

After she finished reading it to her audience, silence ensued, and the host tapped her fingers on her desk in front of her.

The host then spoke to Congressman Adam Schiff about the potential for criminality as well as the timeline of the Russian hacking and the release of information to Wikileaks.

Journalist Yashar Ali tweeted Monday’s New York Daily News cover on Sunday, on which the headline read, “Kid Pro Quo,” probably referring to “quid pro quo,” which according to Merriam-Webster means “something given or received for something else.”

Many people praised the headline on social media: “Beautiful headline, @NYDailyNews ‘Kid Pro Quo’ on DonJr, just magnificent, who wrote it?Geez, one for the ages,” tweeted one user.

“In a previous life I wrote A1 headlines for much smaller papers and this is just, like,the pinnacle. Mad props to this person,” wrote another.