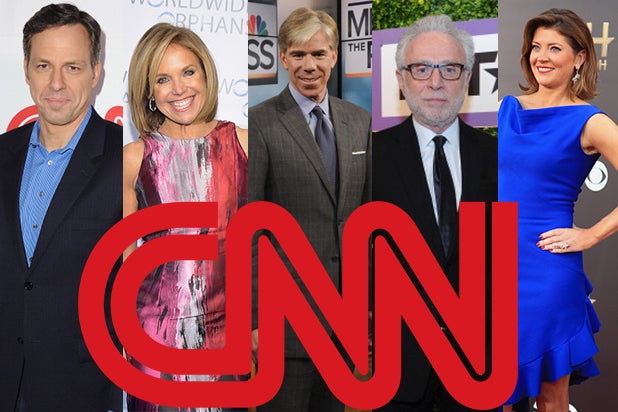 She leaves behind the network’s signature Sunday morning political show “State of the Union,” airing from 9am-10a.m.ET.

Crowley will host this Sunday, but there is no word on whether that will be her final broadcast or when CNN will name a permanent host.

With the 2016 campaign ahead, here are the top 5 likely contenders to replace Crowley as host of “State of the Union.”

Tapper was brought over to CNN two years ago, snagged away from ABC News, where Tapper grew a large following that included calls for him to become the permanent anchor of ABC’s signature Sunday morning show “This Week” after he served as interim anchor following George Stephanopoulos’ departure in January, 2010. ABC opted to insert CNN global affairs anchor Christiane Amanpour as the anchor of “This Week,” which went about as well as your humble author hosting a broadcast Sunday show. Amanpour lasted a little over a year, and when she exited the show, Tapper was again passed up, with Stephanopoulos returning as anchor.

Since debuting as anchor of CNN’s “The Lead” at 4pmET on March, 2013, Tapper has been one of CNN’s go-to political anchors, landing big interviews and also being dispersed out on the ground on big breaking news stories like in Ferguson, Missouri in the aftermath of the Michael Brown shooting. Tapper is known for being equally respected among both Democratic and Republican. If chosen to host “State of the Union,” it’s likely he would remain on as anchor of “The Lead.”

Wild cards teams win the World Series in baseball all the time, so why not in TV News? Couric is currently Yahoo News’ Global anchor, but insiders tell TheWrap she wants back on TV.

She of course made her name as co-host on “Today” before departing to become the first female to ever solo anchor an evening newscast when she anchored “CBS Evening News.” An insider close to Couric told TheWrap “she would definitely be interested in the job if it was offered, but it’s very unlikely it will be.”

I happen to disagree with that take. Katie Couric and CNN President Jeff Zucker are known to be friendly today, with Zucker being the first EP of  Couric’s former syndicated ABC talk show “Katie.” Also, with Couric’s digital credentials at Yahoo, and Zucker known to be emphasizing digital at CNN, it seems like the two would be a re-marriage made in heaven. Couric would be one of the biggest name hires under the Zucker-era, and certainly bring some excitement and eyeballs to CNN Sunday morning.

No risk, no reward, right? Replacing Crowley with Gregory so soon after the latter’s ugly divorce from NBC would be a tough promotional sell for CNN, but Gregory definitely could be Zucker’s idea of the comeback kid. Before “Meet the Press'” ratings tanked over the last two years, Gregory was the moderator when the show was #1 among broadcast Sunday morning shows for many years after he inherited the moderator chair from the late Tim Russert.

Gregory was unceremoniously dumped by NBC News in August and replaced with Chuck Todd. Rumors have linked him to CNN, which insiders at the network have emphatically told TheWrap are nonsense. Nontheless, Gregory is a name; one many TV viewers and media critics feel got a raw deal from NBC News. Big name free agent on the market + 2016 campaign bonanza about to launch + open anchor chair=opportunity.

The “CBS This Morning” co-anchor and chief substitute anchor for “Face the Nation” anchor Bob Schieffer would be a bold and sensible choice for Zucker. O’Donnell bolted NBC in 2011 for CBS, becoming Chief White House Correspondent.

Also read: Who's Really Winning the 'GMA' vs. 'Today' Morning Show War? The Answer Might Surprise You

She was later added to “CBS This Morning” in a morning show shakeup for the network; the trio of Charlie Rose, Gayle King, and O’Donell have helped make the CBS morning show relevant again.

If asked, would O’Donnell want to leave her perch as co-host on a broadcast morning show and her chief substitute anchor role behind 77-year-old Schieffer? Insiders told TheWrap O’Donnell has had her eyes on the “Face the Nation” anchor chair since joining CBS, but would only inhabit it in the event of Schieffer’s retirement.

When there’s a Wolf, there’s a way.  Mr. CNN has seemingly hosted every show and timeslot there is, beloved inside the network and known as its chief political guru.

He currently hosts two programs during the week: “Wolf” from 1pm-2pmET (also airing on CNN International) and “The Situation Room” from 5pm-7pmET. Adding Sunday mornings to the CNN ironman’s schedule might be too much, but an insider close to Wolf told us he would say yes faster than Republicans would throw Obama out of the Oval Office–if given the chance.

Blitzer is a beloved figure among D.C. politicians, with very few balking at the chance to go on-air with him. He also is known for his expertise on global news, anchoring multiple times from Israel during wars between Israel and Hamas.

Prediction: All of these contenders are plausible, with some being more risk/reward than others. But when rubber meets the road time, expect to watch “State of The Union” with Jake Tapper in the next few weeks.