Major Spoilers for the “Top Chef” Season 19 finale. Don’t read unless you want to find out who won before you watch.

After 12 grueling weeks in Houston (and 2 in Tuscon, Arizona), “Top Chef” Season 19 has finally come to an end, with a brand new contestant awarded the title of Top Chef. 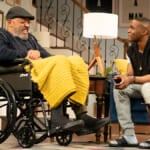 Also Read:
‘What the End Will Be’ Off Broadway Review: 3 Generations of Gay Men in One Family Dramedy

And who won? The new Top Chef is: Buddha Lo.

Lo, Executive Chef at Huso in New York City, won with a four-course progressive menu during the final competition.

“Growing up in Australia, I dreamed about winning ‘Top Chef.’ I went on this competition to showcase to the world what I can do. This win was not only for me, but was for my late father, an incredible chef who taught me how to cook,” Lo said in a statement after his win was revealed.

Along with the title of Top Chef, Lo won $250,000 furnished by S.Pellegrino, a feature in Food & Wine magazine and an appearance at the Food & Wine Classic in Aspen.