Like many young playwrights these days, Mansa Ra has cut his teeth writing for television in this golden age of content creation — in his case, for the NBC medical drama “New Amsterdam.” And that training shows clearly in his engaging but uneven new stage drama “…What the End Will Be,” which opened Thursday at Roundabout’s Off Broadway venue Laura Pels Theatre.

The TV polish starts with the high-gloss production design, with a set (by Reid Thompson) that displays a well-appointed upper-middle-class suburban Atlanta home that would not be out of place on one of those property-porn reality shows. “Three of the Real Housewives of Atlanta live in this neighborhood,” notes Maxwell Kennedy (Emerson Brooks), a buppy business executive who’s constantly on the phone to his bosses and striving to break into the board’s regular golf games.

Ra also hits us with a high-concept premise: Maxwell is gay, with a white husband (“Queer as Folk” alum Randy Harrison); a gay father (Keith Randolph Smith) who’s moving in as he battles Stage 4 bone cancer; and an about-to-pop-out-of-the-closet 18-year-old son (Gerald Caesar). 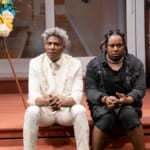 Pity that the high gloss of director Margot Bordelon’s production, amplified by Emilio Sosa’s costumes and Jiyoun Chang’s lighting, can’t cover over this dramedy’s shortcomings — which mostly center on the anachronistic cipher that is Maxwell. Are we really supposed to believe that a gay married executive in 2022 would be as much of a closet case as Maxwell, who warns his football-playing son off his “fairy queen” boyfriend (Ryan Jamaal Swain) by saying: “You have to be careful who you associate yourself with”? Or that his hubby, an overly saintly white man who clearly models better parenting and bristles at Maxwell’s heavy drinking, would tolerate this situation for years?

All too often, Ra sets up many of these generational conflicts only to confront them in ways that lean heavily on clichéd bromides and aphorisms that seem primed for a commercial break that never arrives.

Ra is on surer ground in his depiction of the elder Bartholomew, who is masking his physical pain and contemplating radical steps to alleviate it — all while pining for his late lover, a fellow Vietnam veteran with whom he first connected romantically relatively late in life, after his wife’s death. There is a poignancy, and a humanity, to Smith’s performance — even sneaking sniffs of his paramour’s boxer shorts — that rings far truer than the more artificial plot contrivances around him. 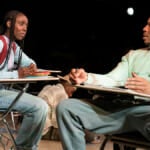 Also Read:
‘Exception to the Rule’ Off Broadway Review: A Disturbing Update on ‘The Breakfast Club’