The box office numbers for “Top Gun: Maverick” are even higher than previously thought.

While the Tom Cruise-fronted sequel was already hailed as the new Memorial Day weekend box office record holder with an estimated $156 million four-day opening, adjusted numbers on Tuesday from Paramount note that the film’s four-day domestic total is actually closer to $160.5 million.

The Joseph Kosinski-directed film broke the previous Memorial Day record held by “Pirates of the Caribbean: At World’s End,” which opened to $153 million in 2007. “Top Gun: Maverick” also scored the highest grossing opening weekend of Tom Cruise’s career, destroying the $64 million opening for “War of the Worlds” in 2004.

“Top Gun: Maverick” rode a wave of positive reviews to its stellar debut at the box office, but it was also a smash hit with audiences, earning a rare A+ CinemaScore from moviegoers over the weekend. It also pulled an 86% “Definite Recommend” rating from Comscore/Screen Engine’s Postrak, results that are on par with Marvel’s “Black Panther.” And unlike most blockbusters with $100 million-plus openings, the audience has been much older with 55% over the age of 35.

It’s a true crowdpleaser in every sense of the word.

The film has been years in the making, as those in Cruise’s orbit — including producer Jerry Bruckheimer — have been intent on making a sequel to 1986’s “Top Gun” but Cruise resisted until they could find a story worth telling. A follow-up was originally in the works with Tony Scott returning to the director’s chair, but was put on ice after the filmmaker’s death.

But the right idea came along in recent years, with Cruise using the productions of “American Made” and “Mission: Impossible – Fallout” to test some of the limits of camera work inside airplanes that he felt would be necessary to capture a “Top Gun” sequel using practical effects.

Working in tandem with Kosinski, Bruchkheimer and frequent collaborator Christopher McQuarrie (who is credited as a co-writer and producer on “Maverick”), Cruise got “Top Gun: Maverick” off the ground and it appears to have been well worth the wait.

The surprisingly emotional story finds Cruise’s character Peter “Maverick” Mitchell training a group of recent Top Gun graduates for a deadly dangerous mission. Complicating matters is the fact that Goose’s son, played by Miles Teller, is one of these pilots who could potentially be put in harm’s way. 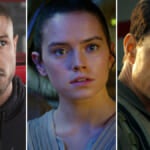