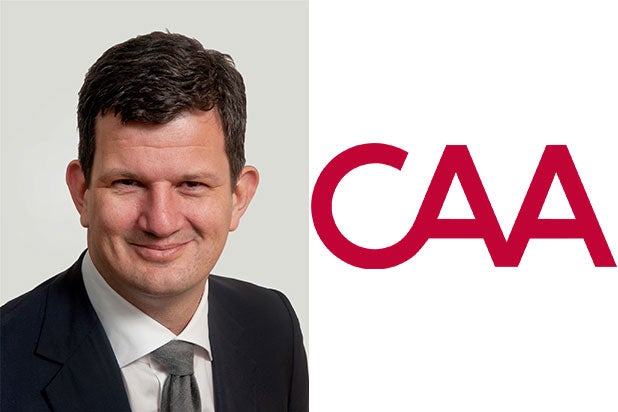 Hasker will take his new office in January, which comes with a seat on the talent agency’s board of directors. He’ll be charged with strategy, mergers and acquisitions and investments at the Global division — which includes entities like CAA China, merchant bank Evolution Media and the incubator CAA Ventures.

“CAA Global is an exciting step in the continued growth and diversification of CAA,” agency President Richard Lovett said in a statement.

“Steve is a transformational and highly accomplished industry executive, and we are thrilled, after conducting an extensive search, to have found someone who also shares so profoundly our cultural priority of collaborative success,” Lovett added.

In his role at Nielsen he oversaw all of Nielsen’s commercial, data, and product-related activities for both the media and consumer businesses. As a data specialist, Hasker’s research has been published in the Harvard Business Review.

He graduated from the University of Melbourne and earned his MBA and Masters in International Affairs, both with honors, from Columbia University.

Leading entertainment and sports agency, Creative Artists Agency (CAA), announced today that industry veteran Steve Hasker has been appointed CEO of the recently structured CAA Global. He will manage the intersection between CAA’s market-leading representation business and its high-growth businesses and investments, bringing together the agency’s growth platforms and ongoing strategic initiatives. He will also join CAA’s board of directors, and oversee the company’s strategic planning, mergers and acquisitions, principal investing, and corporate development initiatives, as well as the company’s data strategy.

Hasker most recently served as Global President and Chief Operating Officer of Nielsen Holdings PLC, where he oversaw all of Nielsen’s commercial, data, and product-related activities for both the media and consumer businesses. He joins CAA in January, 2018.

“CAA Global is an exciting step in the continued growth and diversification of CAA,” said agency President Richard Lovett. “Steve is a transformational and highly accomplished industry executive, and we are thrilled, after conducting an extensive search, to have found someone who also shares so profoundly our cultural priority of collaborative success. Under Steve’s leadership, we are confident that CAA Global will capitalize on the strength of CAA’s position at the nexus of talent, content, technology, and brands across the global marketplace to accelerate growth and innovation for CAA and our clients.”

CAA Global includes assets such as CAA China, a joint venture with CMC Capital Partners that builds upon CAA’s 12 years of success in the fast-growing market; Evolution Media, CAA’s merchant bank, founded in 2008, that has advised on billions of dollars in mergers and acquisitions and manages a $500 million media, technology and consumer brand investment vehicle; 4, an early-stage venture capital fund with 45 portfolio companies; and Vancouver-based Creative Labs, which builds consumer-facing technology companies and next-generation media and entertainment experiences.

“CAA is very well positioned to take advantage of massive technology disruption and changing consumer behavior,” said Hasker. “I look forward to building upon CAA’s long history of industry leadership and relentless innovation to create successful new global businesses and opportunities for its clients and the company.”

CAA has long been recognized for its unmatched roster of the world’s premier artists, athletes, and blue-chip brands, as well as its category leadership in packaging television and film content and live experiences. CAA was also the first agency to build a sports business, create an investment bank, launch a venture fund, found technology start-up companies, establish a presence in China, and start a successful private equity vehicle, among other industry advances.

“CAA’s management team has demonstrated its ability to help drive the evolution of the media and entertainment industry. Since our initial investment in CAA, the company has continued to expand and diversify to capture its enormous potential,” said James Coulter, co-founder of global investment firm TPG, CAA’s majority shareholder. “CAA Global exemplifies these successful efforts, and with Steve as its CEO, we have a deeply experienced business leader with a proven ability to drive growth. We’re confident CAA will continue to accomplish exciting things.”

Prior to joining Nielsen in 2009, Hasker served as a partner in McKinsey & Company’s Global Media, Entertainment and Information practice, focused on strategy, growth, and innovation in television, data, filmed entertainment, sports, and digital advertising. Before joining McKinsey, Hasker served in a number of financial roles in the U.S., Russia and Australia.