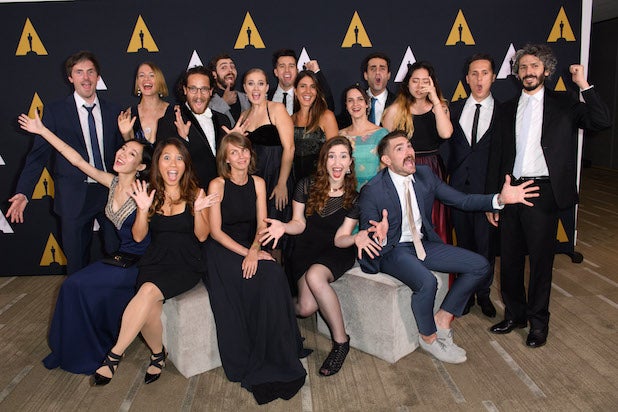 Films from the American Film Institute, USC, the University of California, Berkeley and Columbia University were the gold-medal winners at the Student Academy Awards, which were handed out on Thursday night at the Samuel Goldwyn Theater in Beverly Hills.

The 17 winning films were revealed in August, but the Academy does not announce whether each film has won the gold, silver or bronze medal until the awards ceremony, which caps a week-long series of industry events for the student filmmakers.

David Henry Gerson won the gold medal in the alternative category for “All These Voices,” a short about an SS officer encountering an acting troupe, which he made at AFI. Silver and bronze awards went to Yvonne Ng for “Cloud Kumo” and Johnny Coffeen for “The Swan Girl,” respectively.

Alicja Jacina from USC won the animation gold for “Once Upon a Line” — which, as the title suggests, consists of simple line drawings. Echo Wu won the animation silver for “The Wishgranter,” while Carter Boyce took bronze for “Die Flucht.”

The narrative gold medal went to “Nocturne in Black,” a film about a musician in a Middle Eastern conflict zone by Jimmy Keyrouz from Columbia University. “Art is a mighty tool that helps us fight extremism and terrorism,” said Keyroux in his acceptance speech. Silver and bronze in the category went to two films from Chapman University, Brian Robau’s “It’s Just a Gun” and Brenna Malloy’s “Rocket.”

In the documentary category, the top prize was won by Berkeley student Daphne Matziaraki for a film about refugees in the Mediterranean, “4.1 Miles.” Rongfei Guo won silver for “Fairy Tales” and Elise Conklin won bronze for “From Flint: Voices of a Poisoned City.”

Gold medals in the foreign-film categories went to the University of Television and Film Munich (Alex Schaad’s “Invention of Trust”), the Academy of Media Arts Cologne (Ahmad Saleh’s “Ayny”) and Tel Aviv University (Maya Sarfaty’s “The Most Beautiful Woman”).

The 17 winners consisted of nine women and eight men and made up a distinctly international group: Many of the students from U.S. film schools came from other countries.

Joel Edgerton, Lucy Liu, Daisy Ridley and Parker Sawyers served as presenters at the ceremony. Academy President Cheryl Boone Isaacs began the program by pointing out that a record 385 Academy members served as judges for the competition, while Student Academy Awards Chairman Gregg Helvey, a past winner himself, said that the Academy received a record 1,749 entries from 381 different film schools.

Winners received cash awards of $5,000 for gold, $3,000 for silver and $2,000 for bronze. In addition, all winners qualified for the 2016 Academy Award in either the live-action short, animated short or documentary short category.

In recent years, a number of Student Oscar winners have gone on to receive Oscar nominations, including Luke Matheny’s “God of Love” and Tanel Toom’s “The Confession” in 2010, Max Zahle’s “Raju” in 2011, Talkhon Hamzavi’s “Parvaneh” in 2013 and Patrick Vollrath’s “Everything Will Be Okay” last year.

For the first time, the foreign area also included separate awards for foreign animated and documentary films, with only gold medals handed out in those two categories.

The winners and medal placement: