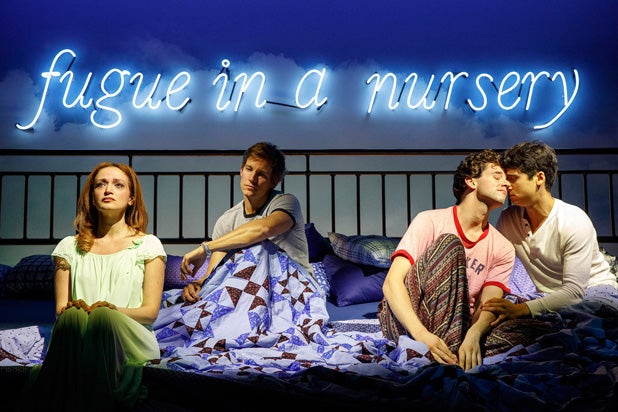 This review first appeared last October when the production opened, with the identical cast, at Off Broadway’s Second Stage.

It turned out to be a downright risible night at the Tony Awards. On June 5, 1983, “Torch Song Trilogy” beat out “Plenty” and “‘night, Mother” for best play of that Broadway season. Granted, the David Hare and Marsha Norman plays have not been blessed with stellar revivals to enhance their reputations since then, but at least no one ever felt the need to cut huge chunks from either work or change the title.

A revival of Harvey Fierstein’s “Torch Song” opened Thursday at Broadway’s Hayes Theatre after a run last fall at Off Broadway’s Second Stage; it’s 45 minutes shorter than the original, and is performed with only one intermission now. That’s the good news.

Late in this comedy, the lead character, Arnold (Michael Urie), references those soapy Susan Hayward movies of the late 1940s and ’50s (“Smash-Up: The Story of a Woman,” “I’ll Cry Tomorrow”), and it must have been the thought of all those black-and-white glam tears that inspired director Moises Kaufman’s weepy staging at Second Stage.

Hayward often played a victim, because she was a woman, we were told. Arnold in “Torch Song” is a victim because he’s a gay man, and Kaufman and Fierstein never let us forget it. Arnold also is a female impersonator, meaning that every blow to his ego must be disguised with one-liners cleverly twisted, tweaked and recycled from “The Women” and “All About Eve.”

And last but not least, Arnold is just this side of Mother Teresa in the saint department, a man so tortured in love that he compensates by taking in a teenage foster child (Jack DiFalco) whom he hopes to adopt if his homophobic mother (Mercedes Ruehl) doesn’t screw things up.

Anyone familiar with the boulevard comedies of the 1950s and early ’60s will know that the 15-year-old kid turns out to be the smartest, most well-adjusted character on stage, despite his having been in out of more homes than a rescue cat, and that Ma the Gorgon will bond with the kid just long enough to stop spitting on her gay son, whom, of course, she loves dearly.

Making Arnold a first-class sufferer doesn’t ennoble him; it merely makes him pathetic. It’s not enough that Arnold’s most recent lover, Alan (Michael Hsu Rosen), has died by the final act. Alan comes to a very bad end (during the intermission, conveniently) to put Arnold’s widow-mother in her place, since her husband of 35 years only died of natural causes. It’s never pretty watching two characters fight over who’s lower (or is it higher?) on the victims’ totem pole.

Fierstein dresses up the battles by making the mother the older mirror image of the son, right down to their totally adorable bunny-rabbit slippers. Ruehl’s delivery is marvelous. She lets the jokes sneak up on us. Weirdly, she is much more believable being Fierstein’s mother than Urie’s.

In the original Broadway and Off Broadway productions, Fierstein played Arnold, and the character loomed large on stage. In addition to his zaftig build, there was that basso voice, which went from merely calloused to downright bloody-sounding during the course of the play’s four hours. Fierstein’s outrageousness got you through the lumpy soap opera moments.

Urie, a svelte tenor, makes for a half-convincing woman when he puts on a dress. He knows how to land a line, but often prefers to detonate it. You know the gags are coming because with almost every other phrase he brays out an absurdly exaggerated diphthong on the last two syllables, and that includes on the word “egg.” (A bad sitcom comment about the overuse of condiments goes on forever.) And when he isn’t diphthonging the English language into Mandarin, his tear ducts are creating mounds of suds.

With or without the “Trilogy,” Fierstein’s comedy doesn’t explore why the loving Arnold would put a foster child through the trauma of meeting his mother without telling Ma what he’s up to. Also unexplained is why Arnold, a smart wise-cracking Jew, keeps falling in love with beautiful but vapid Gentiles. Is it because this ’60s character couldn’t yet learn the lessons of  “The Way We Were” and “Annie Hall”? Most off-putting are Arnold’s put-downs and silent triple takes whenever the goyim say something inarticulate. Which is almost always, except when they’re telling Arnold he’s a great guy.

Ed, one of those handsome boyfriends, might be bisexual, and under the circumstances Ward Horton manages to play the character with considerable charm. It’s obvious that Fierstein wrote “Torch Song Trilogy” in the days before the gay umbrella became better known as LGBTQA, with several more letters in the pike, no doubt. Arnold’s ribbing of Ed’s fluid sexuality comes off as less than tolerant in 2017.

Too tolerant, on the other hand, is Ed’s long-suffering girlfriend/wife, Laurel (Roxanna Hope Radja). As with the Ma-and-kid confrontation, Fierstein creates a scenario — Laurel is in bed with Ed, Arnold and Alan — that begs larger, unanswered questions. Laurel isn’t a woman or even a character. She’s something you’d buy at Home Depot to throw below your front door.