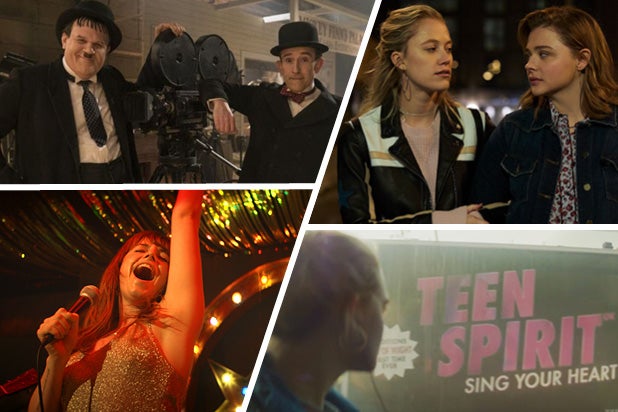 Buyers are putting down their Momofuku cookies and handing over the cash, as film sales are in full swing at the Toronto International Film Festival.

Saban Films and Neon, who have made waves this past year by acquiring several titles at previous festivals, each secured deals, while usual players Sony Pictures Classics, Magnolia, Focus Features and Netflix have also picked up some titles.

While “Wild Rose,” arguably one of the hottest titles for sale at TIFF, has been snatched up by Neon, there are still various hot films up for grabs. For example, Natalie Portman’s “Vox Lux” still has no distributor, neither does Elisabeth Moss’ “Her Smell.”

Additionally, many of TIFF’s biggest titles that are coming from immediate festival predecessors Venice and Telluride have distribution in place and are vying for awards attention: Damien Chazelle’s “First Man,” Bradley Cooper’s “A Star Is Born,” Marielle Heller’s “Can You Ever Forgive Me?” Karyn Kusama and Nicole Kidman’s “Destroyer,” Robert Redford’s “The Old Man and the Gun,” Steve McQueen’s “Widows” and so on.

Here’s what’s been picked up in Toronto so far:

As one of the first acquisitions of the festival, Saban Films acquired the rights to the sexual abuse drama “Romans” starring Orlando Bloom.

Directed by Ludwig and Paul Shammasian, the film stars Bloom as a man struggling to cope with the sexual abuse he suffered as a child at the hands of a priest, and who now has the opportunity to demolish the church where his abuse occurred.

Neon, the indie distributor that has been making waves at festivals, landed the domestic rights to “Wild Rose,” arguably the hottest sales title at the festival this year.

The company, co-founded by Tom Quinn and Tim League, landed the finished film in a competitive situation, for roughly $4 million. The movie follows an aspiring country singer who wants to leave her humdrum life in Scotland for a Southern-fried adventure in Nashville.

“The Hummingbird Project” follows cousins from New York (Eisenberg and Skarsgard) who are high players in the game of High Frequency Trading. Their dream is to build a fiber-optic cable between Kansas and New Jersey which would make them millionaires — and they will let nothing stop them in the process.

The Orchard is planning a release for the film in early 2019.

Nnaji, a notable Nigerian film star, plays an enterprising daughter competing with her crude and eccentric uncle to control her family business when her father falls ill.

Focus Features landed Neil Jordan’s thriller “Greta” following the film’s premiere at TIFF. It stars Chloe Grace Moretz and Isabelle Huppert and is described as a film about female obsession. Jordan wrote and directed the film.

There were several companies interested in “Greta,” but Focus Features’ deal gives the distributor rights for the film in North America, Australia and China. Universal, Focus’ parent company, already has a deal for the U.K.

“Maiden” tells the inspirational story of Tracy Edwards, a 24-year-old cook on charter boats, who became the skipper of the first all-female crew to enter the Whitbread Round the World Race in 1989.

Well Go USA landed the English language rights to “Freaks” for around $2 million at the festival. The film made its debut at the festival on Saturday and stars Emile Hirsch, Bruce Dern, Lexy Kolker and Amanda Crew. It follows a girl who discovers a bizarre and threatening new world behind her front door after she escapes from her paranoid father.

Zach Lipovsky and Adam Stein directed the psychological thriller from their script, and the distributor is planning a theatrical release for it.

The nature film follows Athena, an elephant matriarch who will go to any length to protect her family when they are forced to leave their waterhole to survive.

Elle Fanning’s “Teen Spirit” was sold to producer and CEO and founder of LD Entertainment Mickey Liddell at the festival. The film is the directorial debut for “Handmaid’s Tale” actor Max Minghella, who also wrote the film’s script.

Liddell will partner with a distributor for “Teen Spirit.” A source familiar with the deal told TheWrap it was in the $8 million range, and bidding was competitive.

“Teen Spirit” follows Violet (Fanning), a shy teenager living in the Isle of Wight, who dreams of pop stardom as an escape from her small town and shattered family life. With the help of an unlikely mentor, Violet enters an international singing competition that will test her integrity, talent and ambition.

“Aniara” is meant to present a panoramic view of the possible fate of  the human race after they have destroyed the planet. The film tells the story of one of the many spaceships used for transporting Earth’s fleeing population to their new home-planet, Mars. As the ship, Aniara, leaves the ruined Earth, she collides with space debris and is knocked off course. As the passengers slowly realize that they’ll never be able to return, they continue onwards through an empty and cold universe. In Aniara’s inexorable journey towards destruction there is a warning that cannot be emphasized enough: there’s only one Earth.

Neon has had a big festival so far, also nabbing the critical hit “The Biggest Little Farm” for $2 million. The documentary follows a director and his wife as they attempt to develop a sustainable farm just north of Los Angeles.

The film had its international premiere on Friday. John Chester directed and co-wrote with Mark Monroe.

Magnolia Pictures landed the North American theatrical rights to A&E IndieFilms’ “Divide and Conquer: The Story of Roger Ailes,” at TIFF. Magnolia is planning a Dec. 7 theatrical release date, and A&E will release the film on TV following its theatrical run.

The film, described as “no-holds-barred,” was directed by Alexis Bloom (“Bright Lights: Starring Carrie Fisher and Debbie Reynolds”), who produced alongside Will Cohen of Jigsaw Productions.

Julianne Moore’s “Gloria Bell” was acquired by A24 ahead of the festival. Sebastian Lelio’s newest film also stars John Turturro, Brad Garrett, Rita Wilson and Michael Cera. Written and directed by Lelio, “Gloria Bell” is a remake of his 2013 breakout Chilean feature of the same name.

The film follows Gloria (Moore), a free-spirited divorcee who spends her days at her office job and her nights on the dance floor. When she meets Arnold (Turturro), she finds herself in the midst of an unexpected romance.

It’s not a movie yet, sure, but Daniel Craig and Rian Johnson’s murder mystery package “Knives Out” sold to MRC at the festival.

Rian Johnson wrote the script with his producing partner Ram Bergman, and will direct the film that is now fully financed.

The film is described as a modern-day murder mystery in the classic whodunit style infused with Johnson’s original voice that informed films from “Brick” to “Looper.”  Daniel Craig will star as a detective assigned to solve the crime.