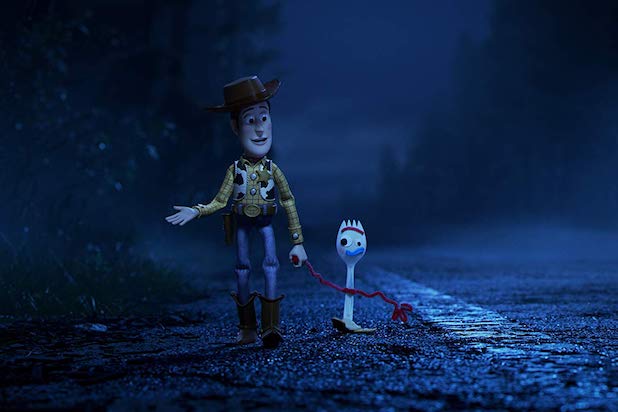 After the unalloyed triumph that was “Toy Story 3,” did we need another sequel to the popular Pixar series? Not really. Now that “Toy Story 4” exists, does it tarnish the reputation of a franchise that is the gold standard in contemporary American animation? Not in the slightest.

To watch “Toy Story 4,” or any of its direct predecessors, is to be reminded of the pleasure, the emotion, the wit and the craft that is so often missing from mass-market animation. While knock-offs abound, spouting the same tired messaging about believing in yourself and not being fooled by appearances — looking at you, “UglyDolls” — the “Toy Story” movies have turned a heap of playthings into characters with souls and motivations.

We open with a flashback to a rainy night in what we should now call the “Andy era” of these movies, where we see Woody (voiced by Tom Hanks) and Bo Peep (Annie Potts) execute a tricky rescue of a radio-controlled car that’s been stuck in a gutter and could be washed into the sewers at any moment.

Director Josh Cooley (a Pixar vet making his directorial debut) and screenwriters Andrew Stanton and Stephany Folsom — a team of other writers, including Rashida Jones, share a “story by” credit — isn’t just starting his movie off with a jolt of excitement; the scene also lets us know the lengths to which these characters will go to avoid turning one of their brethren into a “lost toy,” and it underscores the relationship between Woody and Bo, who are torn apart moments later when the lamp that houses her and her sheep is given away.

Nine years later, after Andy has passed his beloved toys to young Bonnie, she continues to play with them all, although Woody finds himself more frequently relegated to the back of the closet with her baby toys (voiced by a squad of comedy legends). When Bonnie is nervous about attending kindergarten, Woody takes it upon himself to sneak into her backpack to provide moral support. When an obnoxious classmate steals her art supplies, Woody fishes them out of the trash, which leads Bonnie to create Forky, a spork with popsicle-stick feet, mismatched googly eyes and pipe-cleaner arms. Forky is a star.

Forky is also, as Woody discovers when the two of them are alone, now a toy with the voice of Tony Hale. The ontology of his genesis will no doubt inspire future doctoral theses, but here, Trixie (Kristen Schaal) speaks for everyone when the discovery of Forky prompts her to say, “I have questions. Um, well, actually, not just one — I have ALL the questions.” Even though Bonnie adores Forky, he keeps wanting to return to the trash, where he feels safe. And since Woody feels the need to justify his presence in an increasingly aloof Bonnie’s life, he takes it upon himself to keep rescuing and returning Forky, a job that gets all the more difficult when Bonnie and her parents take a road trip in an RV.

It’s a journey that will involve carnival toys (Keegan-Michael Key and Jordan Peele as Ducky and Bunny), an Evel Knievel-esque Canadian stunt-motorcyclist action figure (Keanu Reeves as Duke Caboom), and a vintage Gabby Gabby (Christina Hendricks) who thinks that Woody can give her the one thing she needs to be loved by a child. (Gabby Gabby’s henchmen are a team of frozen-faced, floppy-necked ventriloquist dummies voiced by Steve Purcell. I cannot say whether or not your young children will be terrified by these ventriloquist dummies; I can only say that I am terrified by ventriloquist dummies.)

There’s adventure and growth and the subtlest brands of messaging and metaphors that current family films can offer, and even for “Toy Story 3” die-hards like myself who treated this film’s very existence with suspicion, you have to give it to Disney/Pixar for making a sequel that does indeed disrupt the status quo. So many follow-ups work overtime to return its characters and its storytelling to square one, but “Toy Story 4” is, in its way, as much of a game-changer as “Avengers: Endgame.” If and when “Toy Story 5” comes about, it’s going to find these characters in different places both geographically and emotionally.

And it’s the emotions that pay off here, whether it’s Woody and Bo being rendered speechless by the beauty of a bank of chandeliers to the sacrifices and partings various characters will encounter along the way. This is a film that imbues a fork-based craft with feelings and a sense of humor, but it’s been doing that all along with piggy banks and dinosaurs and Potato Heads.

Pixar could easily retire this series with a clean sweep of films that have been lovely to look at and moving and funny to watch. But if they can maintain this level of wonderful, keep ‘em coming.