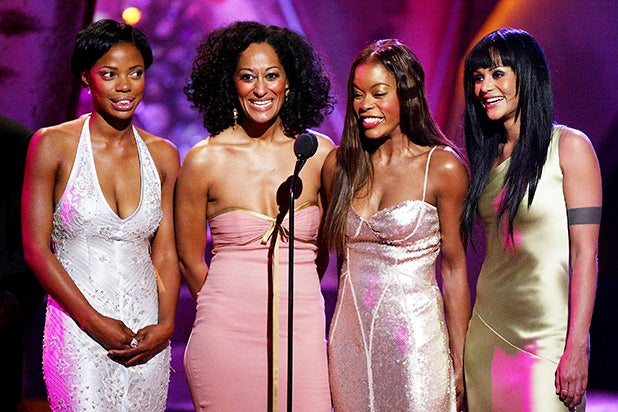 “Black-ish” will host a “Girlfriends” reunion this season, with Jill Marie Jones, Persia White and Golden Brooks set to re-join their former co-star Tracee Ellis Ross in an upcoming episode of the ABC family sitcom.

Ross announced the news on the “Black-ish” Twitter account on Thursday, revealing the foursome on set for the Oct. 8 episode titled “Feminisn’t.”

“The timing was perfect to be able to bring ‘Girlfriends’ to a whole new audience,” Ross told Entertainment Weekly, which has several first-look images from the episode. “We haven’t all been together on camera since 2006.”

“Girlfriends ran for eight years and was important to so many people,” she continued. “Being able to merge the worlds of black-ish and Girlfriends was surreal for me — and so much fun. These are women I grew up with and love deeply and it was easy to tap back into the magic of our chemistry and how much we love each other. It was giggles on top of giggles on top of giggles.”

“Girlfriends” ran for eight seasons between 2000 and 2008, with the first six airing on UPN and the final two on successor network The CW.