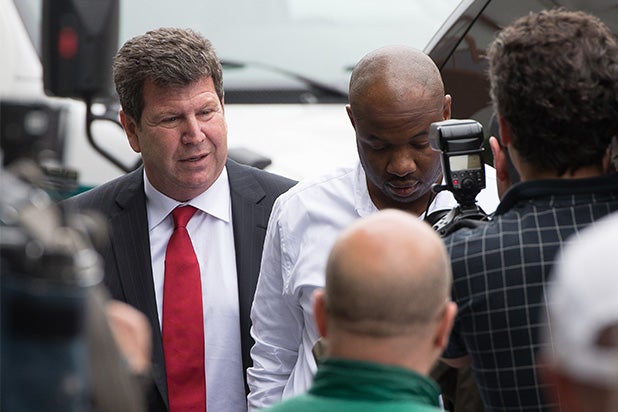 Kevin Roper, the Walmart truck driver accused of causing the crash that killed one person and left comedian Tracy Morgan and three others injured, pleaded not guilty to all charges Wednesday at his arraignment in Middlesex County Superior Court in New Jersey.

Roper, pictured above, had been charged with one count of death by auto and four counts of assault by auto in the collision, which occurred at approximately 1 a.m. Saturday on the New Jersey Turnpike.

Roper of Jonesboro, Ga., surrendered on Saturday night and posted bail shortly after he was booked by New Jersey State Police. The bail amount was kept at $50,000 during Wednesday’s court proceedings.

The tractor-trailer that Roper was allegedly driving crashed into the Mercedes Sprinter that Morgan and several others were traveling in, causing it to flip over and leading to a multi-vehicle crash.

Morgan suffered multiple injuries in the accident, including a broken leg, a broken femur, a broken nose and several broken ribs. He underwent an operation on Sunday and, while his spokesman said that the actor was “more responsive” on Sunday, he remains in critical condition and is expected to spend weeks in the hospital.

Morgan had been returning from a standup show in Delaware at the time of the crash. In addition to Morgan, comedians Ardie Fuqua, Harris Stanton and Jeffrey Millea were also injured. Comedian James McNair, who performed under the name Jimmy Mack, was killed in the crash.