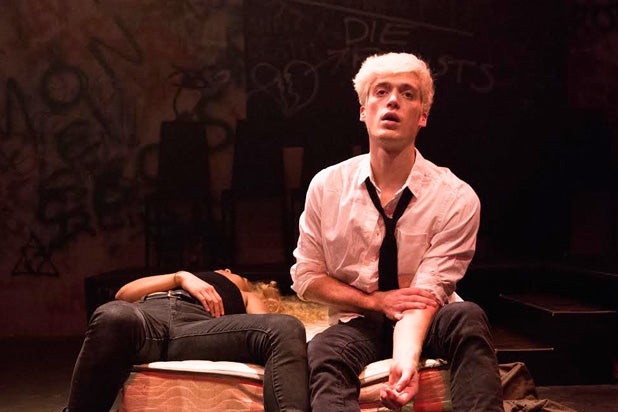 Forget about the fourth wall. The outrageously funny and extremely immersive stage adaptation of “Trainspotting,” which opened Sunday at Off Broadway’s Roy Arias Stages, also completely obliterates the first, second, and third walls.

Adapted by Harry Gibson from John Hodge’s novel, the play “Trainspotting” is geared for audiences who enjoy being sprayed with “toilet water,” stumbled over by actors pretending to be stoned, and covered in a blanket stained with the leading man’s feces. Since the theater is never redolent with bathroom stench, let’s assume that the brown stuff on the blanket and streaked across the couch and hanging from actor Andrew Barrett’s lean buttocks is not the real thing.

The scene is very extended, just one of many about a bunch of Edinburgh blokes who find themselves attempting to survive (or not) a heroin epidemic; and in its bold defiance of our expectations of what a night of theatergoing is supposed to be, this extended poop scene forced me to laugh in a way I haven’t laughed in the theater since Everett Quinton indulged in a far less graphic scatological moment in the Ridiculous Theatrical Company’s “Jekyll and Hyde” back in the 1980s.

The thing about shocking an audience within the first five minutes of a play is that it conditions us to both expect and want more of the same. Suddenly, it’s hard to concentrate when the actors are simply cursing each other (and a female theatergoer, who is called a “frigid bitch”), the thick Scottish accents being only part of the problem. The Warning Sign outside the theater door lists no fewer than 15 cautions, including the “Scottish accents,” “haze,” and “strobe effects,” as well as “needles” and “the worst toilet in Scotland.”

Since the worst-looking toilet in midtown Manhattan is only slightly to the right of center stage, it’s a good bet that the dialogue will soon take another back seat to the ersatz but extreme scat. It comes when Barrett, playing Renton (Ewan McGregor in the 1996 film), shoves an opium suppository up his anus and immediately has to take a dump — only to be thwarted in that task by two mates taking a whiz in the toilet.

Here, discretion does rear its head (pun intended). I recall an Adam Rapp play at the Rattlestick Theater (“Finer Noble Gases”) where an actor urinated for what appeared to be at least two minutes of stage time. The peeing here is simulated, rather brilliantly by having the two actors use their finger to impersonate their penis. Eventually, the hero is able to relieve himself (I recall Wayne County actually defecating on stage on Club 82 back in the 1970s), but not before he empties what appears to be a condom full of urine on the audience and then starts to scoop out water from the toilet bowl, also dousing the audience, so he can find another suppository, momentarily lost in the loo.

For theatergoers who don’t want to deal with fake urine or fake beer being sprayed from the mouth of an actor (a few drops hit my left arm), it is recommended that you sit not in the middle of this narrow, rectangular theater but on one of the two far ends.

So much for the bathroom aspects of “Trainspotting.”

The shooting up takes place in the second half of this 75-minute play. It’s here that the outrageous humor ends and the truly scary part begins. “Trainspotting” in the theater is a little like attending an AA meeting, wherein the first half of an addict/alcoholic’s public confession is laced with hysterically rousing anecdotes of insobriety, followed by that big uh-oh moment when everything unravels tragically.

On stage, Adam Spreadbury-Maher’s direction makes this difficult transition with unusual ease, in part because the lead performances take a naturalistic turn. In addition to Barrett, there’s the charismatic Tariq Malik as Sick Boy, and Greg Esplin’s remarkable final turn as the ill-fated Tommy is harrowing in its realism.

There are several simulated needle injections, the last one being Esplin’s. He shoots up in a way that’s as disturbing as anything you’ve ever seen on stage or in the movies. I won’t reveal all here, but in his long search for a good vein, Malik doesn’t substitute his finger for the real thing.