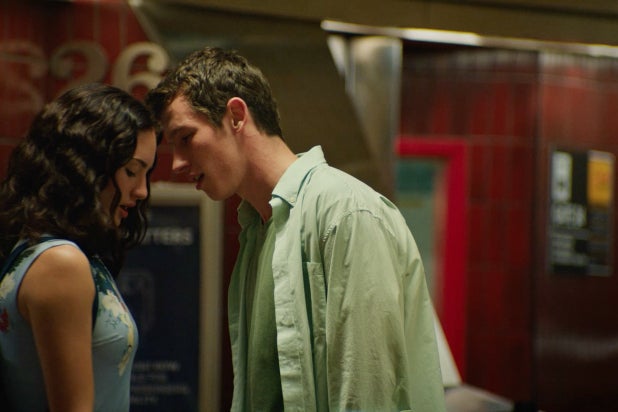 The echoes of fast-talking, flirty couples from screwball through French New Wave, from Woody Allen through every promising Woody wannabe, reverberate through this zippy, well-acted tale of a guileless aspiring chef (Callum Turner, “Queen & Country”) and a tart-tongued sharpie (Grace Van Patten) thrown together on a two-day adventure through the hubs and across the boroughs. Marked by engaging performances and an effortless sense of place, “Tramps” has the good sense to win you over with a crackling, honest vibe instead of convincing you it’s reinvented the romantic comedy wheel.

We meet Danny (Turner) as a dutiful, cooped-up son helping his Polish mother (Mariola Mlekicki) run a gambling operation out of their Astoria apartment, and joyfully cooking in their cramped kitchen. When his hustler older brother Darren (Michal Vondel) calls with the news that he’s in a correctional facility and unable to pull off a briefcase-pickup job, Danny agrees to sub for him, as long as he pretends he’s Darren.

Though the gig is relatively simple — locate a certain car, get driven to a scheduled rendezvous, switch out one briefcase for the other — Danny arrives at the subway station only to misidentify the courier. As the doors close on his train and it starts moving, he realizes he’s got the wrong bag, and that a stranger has somebody’s all-important package. Armed with a name and an address from the green purse he’s left holding, Danny and the driver, a tough-skinned Pittsburgh gal named Ellie (Van Patten), are tasked with completing a botched mission so they can secure promised paydays each needs to help them get out of their respective life ruts.

In almost any other movie with this kind of set-up, the stakes would feel like life or death, thanks usually to the introduction of some unhappy, threatening goon. But Leon has other ideas, namely monitoring the relationship between two young strivers on a revelatory detour into larceny. Besides, you don’t give the role of the hectoring point person on an illicit operation to someone like semi-schlubby comedian Mike Birbiglia (disarmingly funny here) if you’re trying to convey dire consequences for your leads.

Goofy motormouth Danny and prickly, level-headed Ellie venture forth, first breaking in to a fancy house in Ossining that allows them to rummage through an imagined domestic future, then back into the city to deal with a few late twists. By the time their story wraps up, the briefcase begins to feel about as important as whether Clark Gable‘s cynical newsman gets to write that big story about Claudette Colbert’s runaway heiress in “It Happened One Night.” Like the dynamic in that getting-to-know-you classic — built strategically on when and where its mismatched pair find themselves in close quarters — the sense of discovery is in how Danny and Ellie circle each other.

“Tramps” logs a lot of miles as its central duo traverse a city on foot, by subway and on stolen bicycles, but what it reminds you most of is how pleasurable movies can be when they hinge on what people say, whether words sting, tease, incite laughter or earn an eye roll. On that front, ascending stars Turner and Van Patten are beautifully locked into the charisma of a piece about strangers who realize their time together could mean more than just a quick buck.

Leon’s song score is also exemplary, as both get-up-and-go music and a canny juxtaposition with its protagonist’s emotional zigs and zags. Tunes cover a spectrum from twangy bluegrass to blitzing funk, from the old-fashioned jazz-era sweetness of “Jitterbug Waltz” to the jukebox rock of “Cherokee Boogie.” And as with “Loot,” Leon’s use of New York streets is electric, geared toward capturing the energy of a city that allows you to move, stop, argue, worry and have an epiphany, all while people around you couldn’t care less.

Leon’s New York has plenty of uncertainty, but it hums with possibility, especially the notion that if you miss one connection, another one’s right around the corner. In that respect, “Tramps” is beautifully breathless.