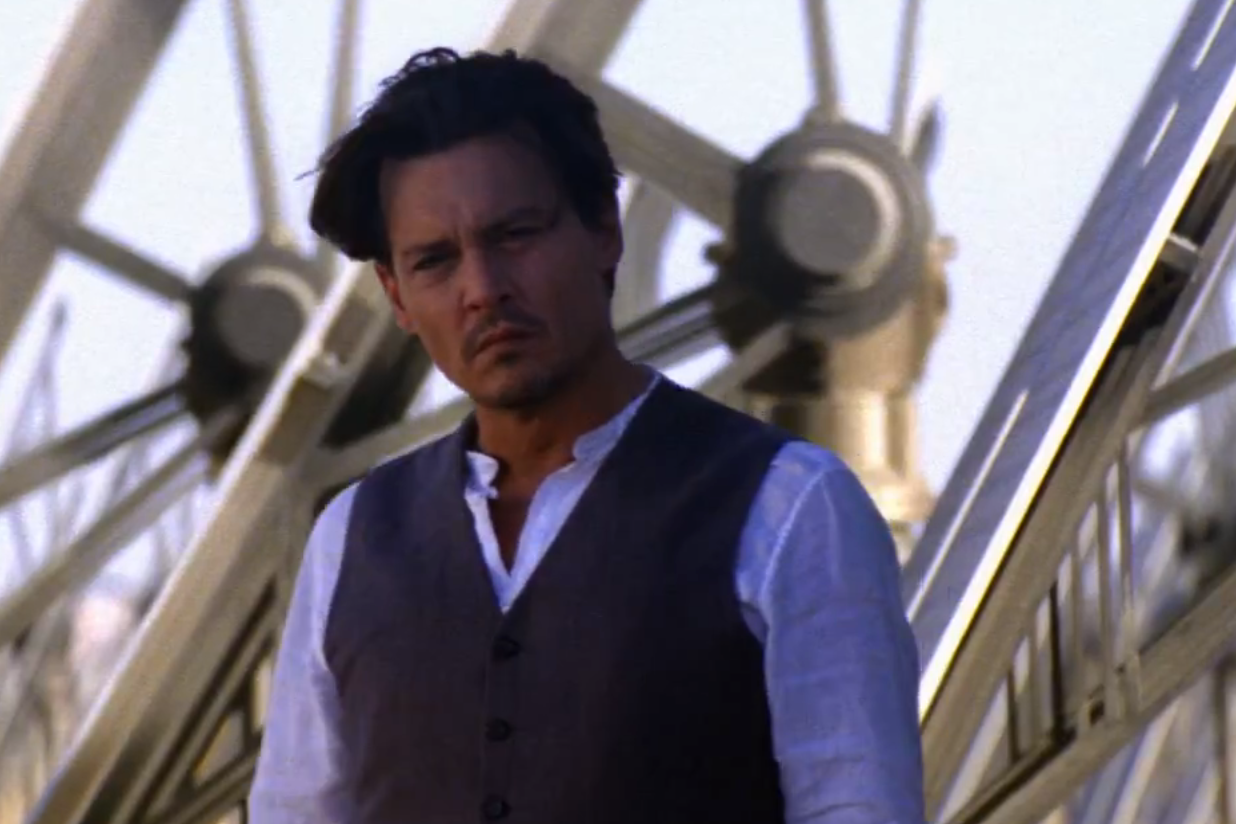 “Transcendence” unites Johnny Depp with key members of Christropher Nolan’s creative team for what is shaping up to be one of the biggest films of the spring.

“The Dark Knight” visionary won’t direct this one — he’s left those duties to longtime cinematographer Wally Pfister — but he will produce the film and the glittering, menacing future revealed in a new trailer for “Transcendence” reveals his influence in nearly every frame. Plot details for the film have been guarded with Kremlin-like intensity, but if anything this trailer reveals too much of the story.

That said, it’s gripping stuff and April 18, the date the film is set to finally reveal all its mysteries, can’t arrive soon enough.

Here’s a look at how movie fans are much the wiser about the twists and turns they are in store for when “Transcendence” hits theaters.

1. JOHNNY DEPP STARTS OFF SUBTLE AND THEN…

In the first moments of the trailer, it’s hard to believe that this is the mascara wearing, Pepé Le Pew channeling star of “Pirates of the Caribbean” and “Alice in Wonderland” fame. Depp is somber as he details the glories of artificial intelligence and babbles on about “the fundamental secrets of the universe” to a crowd of scientists in what looks like a TED talk with better camera angles, but then an attempt on his life is made. That gives the actor something to sink his chompers into, not to mention some menacing looking headgear. Seriously, there’s a reason makeup artists are honoring Depp this week.

As Kevin Spacey found out on “House of Cards,” Kata Mara is more than the sum of her red carpet ready looks. In “Transcendence,” Rooney’s big sis plays a member of a group called “Revolutionary Independence From Technology (RIFT)” and dons not one, but two fright wigs in the newest trailer.

“They don’t know the danger,” Mara warns Depp’s friend and fellow scientist (Paul Bettany) at one point. Given her intense glower, she totally does.

Also read: Johnny Depp ‘Mortdecai’ Has Franchise Written All Over It, Lionsgate Says

3. YOU MAY WANT TO CONNECT JOHNNY DEPP TO THE INTERNET, BUT BE WARNED

After Depp is shot and nearly killed, his adoring wife (Rebecca Hall) convinces Bettany to upload his consciousness into a supercomputer. This process appears to be called transcendence, thus explaining the film’s metaphysical title. It also gives Depp a chance to flex his megalomaniac side as he quickly sets about shutting down power grids, causing explosions and generally behaving like a digital John Dillinger.

4. MORGAN FREEMAN SHOULD WIN AWARDS FOR MOST DRAMATIC LINE READINGS

Seriously, does anybody do a better job of conveying the stakes of a plot with more gravitas than Freeman. Based on the trailer, it’s completely unclear who Freeman is playing, what he does for a living and how he factors into the plot, but however he pays the bills, he pulls the whole thing off with authority.

“This isn’t evolution, it’s an abomination,” Freeman says at one point.

“If we don’t stop him, it will be the end of mankind as we know it,” he adds.

In case you missed it, this is all extremely, incredibly, terribly, historically, spiritually serious.

5. TRAILERS ARE TOO DAMN LONG

There’s a reason exhibitors are pushing studios to make sure that trailers don’t exceed two minutes in length. They give away too much of the story. The new trailer for “Transcendence” clocks in at 2 minutes, 34 seconds, and though it’s undeniably gripping, it feels at times like the only thing audiences aren’t seeing is the fourth act. In a nut shell: Johnny Depp gets shot, his scientist friends link his brain with a supercomputer, the experiment goes terribly wrong. The only thing missing is the part where they save humanity.

Wouldn’t it have been more interesting if we’d been kept in the dark about whether or not Depp remains good or evil?