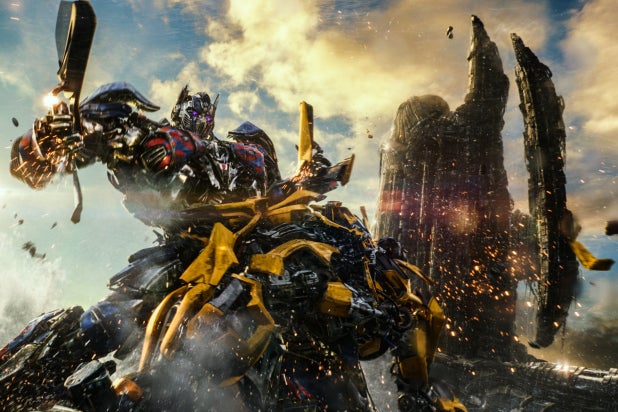 There are a few action sequences of shocking coherence in “Transformers: The Last Knight,” the fifth of Michael Bay’s clang-clang-clang-went-the-robot adventures, but fear not, fans of the franchise: if you’re here for the director’s trademark chaos editing (where fights go from points A to D to Q), toxic masculinity (and female objectification), comedy scenes rendered tragic (and vice versa), and general full-volume confusion, you’ll get all those things in abundance.

In a way, the film plays like a greatest-hits collection of the worst films so far of Summer 2017, from an appearance by the Knights of the Round Table that calls to mind “King Arthur: Legend of the Sword,” the leaden comedy and leering courtship of “Baywatch” and the general “Why are we in England again?”-ness of “The Mummy.”

To be fair, there’s an answer to that last question: turns out the magic that allowed Merlin to summon the dragon that beat back the Saxon warriors on behalf of King Arthur was actually Transformers technology, from a spaceship that crashed in Brittania back in the 10th century. The staff given to the boozy fake wizard (Stanley Tucci returns for another children’s-theater performance) turns out to be the essential doohickey of this movie that everyone wants.

Optimus Prime (voiced by Peter Cullen) has returned to the Transformers’ home planet of Cybertron to tell his creator to quit trying to destroy Earth, but instead he’s hypnotized by the jellyfish-like Quintessa (Gemma Chan), turned into Nemesis Prime, and sent back to get that staff so that Quintessa can drain Earth of its energy and restore Cybertron to its former glory. The U.S. Army decides to release the evil Megatron (Frank Welker) from prison — and allow him to recruit his own evil-robot dirty dozen — to get the staff first, with the idea that they’ll double-cross him and take it away from him before he can do damage with it.

(Bay loves fawning, recruitment-ad-ready shots of our fighting forces and their machinery of war, but he’s not above showing the military making really stupid decisions and then later deferring to civilians mid-battle.)

Meanwhile, Cade Yeager (Mark Wahlberg) is a pro-Transformers fugitive, traveling around and helping out robots in need; one of them gives him a talisman that also dates back to Arthurian times. Before long, he’s recruited by Sir Edmund Burton (Anthony Hopkins), who gathers Cade and Oxford professor Dr. Vivian Wembley (Laura Haddock, “Guardians of the Galaxy, Vol. 2”), who are apparently the only two people on Earth who can find and use the staff to save the day.

Admittedly, writing down all that story made me feel a little ridiculous, so I can only imagine how Hopkins felt having to sonorously narrate the movie, giving names like “Optimus Prime” and “Megatron” their plummiest pronunciations ever. Of course, there’s a history of talented people slumming it in these movies; along with Hopkins and Tucci this time around, there’s Jerrod Carmichael, Jim Carter (basically reprising his Mr. Carson from “Downton Abbey,” only as a steampunk mechanical man), Tony Hale, and Phoebe Nicholls (as one of Vivian’s clucking, match-making aunts). Meanwhile, the returning John Turturro literally phones it in far, far away from plot relevance in Havana, Cuba. (In retrospect, it’s good he got the free vacation while he could.)

The aforementioned coherent scenes are exciting to watch — there’s an entertaining segment early on where a seemingly blown-apart robot uses its various limbs to separately fight a band of enemies — but by the end of the movie, we’re treated to yet another assaultive Michael Bay finale, where everything is fighting everything else as visual reality collapses and the soundtrack (by Steve Jablonsky, “Deepwater Horizon”) just booms and booms and booms. The final effect isn’t exhilarating, it’s enervating: a lullaby performed by a rock tumbler.

Wahlberg continues to show an affinity for roles that allow him to be both the only person who can save the day and the only person who’s right about everything, but that’s as much as he gets from screenwriters Art Marcum, Matt Holloway and Ken Nolan, who continue the “Transformers” tradition of treating character, plot and pacing as quaint, old-fashioned niceties that get glancing notice, if any. (Did I mention the spunky orphan, played by Isabela Moner of “Middle School”? Must have forgotten her, much as the movie does for large swaths of time.)

In film like “I Heart Huckabees,” Wahlberg has a light comic touch, but a supposedly funny scene in which he returns to his junkyard home to yell at a bunch of obnoxious robots is going on his Razzies Life Achievement reel next to clips from “The Happening” and “Max Payne.” It doesn’t help that, in these movies, when adults lose their temper they immediately become 12-year-old boys with anger-management issues; even Carter’s Cogsman character curses and has snits, and he becomes far less interesting.

Hopkins gets one or two scenes where he’s actually enjoying himself and not just mentally calculating whether this paycheck can get him a walk-in humidor to go with the new wine cellar, and poor Haddock, as the female lead, is stuck contending with being a multi-degreed academic who nonetheless has an affinity for oxygen-depleting skirts and push-up bras, all captured in full effect by cinematographer Jonathan Sela (“John Wick”).

For non-fans, there’s no explaining how this series got to a fifth installment, but if you’re one of those audiences that has eagerly forked over your cash four times before, Paramount and Hasbro thank you, and they’ve served up another hasenpfeffer of loud, disjointed confusion for you in “Transformers: The Last Knight.”