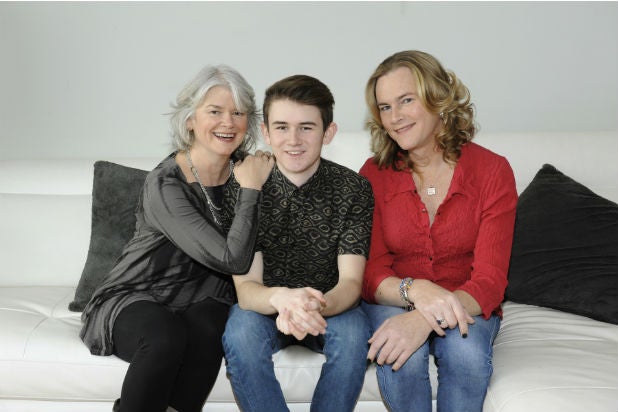 “The story is really about the family and friends of a trans person or persons who have made the choice to live as who they truly are,” Moll told TheWrap. “I think that’s an interesting point of view and a story that really hasn’t been told before, especially since its through the eyes of the children of trans people.”

“Becoming Us” follows Ben, an Illinois teenager, coping with the fact that his father, born Charlie, is transitioning to a woman named Carly. Ben is supported along the way by his mother, Suzy, and his girlfriend, Danielle, whose father is also transitioning.

The series premiere comes at a time when the transgender issue is front and center, following Caitlyn Jenner’s very public introduction last week on the cover of Vanity Fair.

While Moll supports Jenner’s transition, he feels that her story is not truly representative of the trans community. “I think that what Caitlyn’s done is very brave and should be respected,” he said. “The difference is, and I think trans people on our show have said this on occasion, Caitlyn is still very much kind of an out of reach Hollywood icon who can afford — you know — doesn’t have to spare any expense to look absolutely marvelous.”

“That’s not the reality for the vast majority of trans people who look in the mirror everyday hoping to see the person they want to be and that they truly are,” Moll continued.

Moll also said the shoot was incredibly emotional for some of the cast. “It was Ben’s feeling of abandonment, not really understanding what Carly was doing and why. And then, you know, the very real hurt that Suzy experienced losing a husband and the anger that comes with any divorce.”

The executive producer went on to say he hopes the show can be a source of hope for those struggling with their identity. “Suicide is an epidemic among trans people and unless people are allowed to live freely without fear of some kind of act of violence or discrimination the trend will just continue,” he said. “We need to open up those doors and I think that’s what ‘Becoming Us’ hopes to do.”

“Becoming Us” premieres Monday, June 8 at 9/8c on ABC Family.