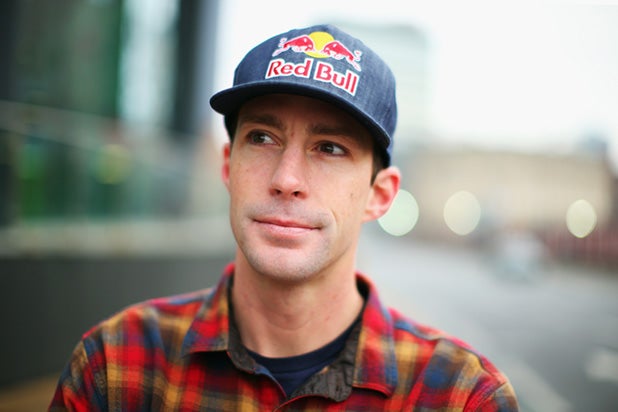 Pastrana will ride a modern-day replica of the bike Knievel used, attempting three jumps: over 50 cars,  over 14 full size buses, and over the Caesars Palace fountain – the jump that resulted in a near-fatal crash for Knievel.

“Evel Live” will air Sunday, July 8 as part of the network’s annual “Car Week” programming block, and will also feature live interviews with Knievel and Pastrana family members, archival footage of the history behind Knievel’s many daring jumps, as well as expert analysis.

Also Read: 'Being Evel' Producer Johnny Knoxville on Why Evel Knievel Was a 'Living Superhero' (Video)

The network also unveiled plans on Wednesday for “History 100,” a slate of 100 original documentaries focusing on historical events of the last 100 years. The first batch of eight films include a one-on-one interview between Werner Herzog and Mikhail Gorbachev, a look back at “Operation Eagle Claw” to end the Iran hostage crisis, and the story of the Mercury 13, the very first female would-be  astronauts.

“The only way to understand today is to see it in the context of yesterday and History is committed to scouring the past for the most gripping, fascinating stories,” said Eli Lehrer, Executive Vice President of Programming, History. “Our dynamic and diverse array of award-winning storytellers will bring the history of the past 100 years to life through the fresh voices and perspectives in these groundbreaking documentaries.”

See the slate of “History 100” documentaries and Car Week programming below:

“Meeting Gorbachev” (working title)
Acclaimed director Werner Herzog meets Mikhail Gorbachev for a series of exclusive one-on-one interviews with the man who ended the cold war. Using Gorbachev’s personal archives as well as interviews with key political players from the last 30 years, this will be a deeply humanizing portrait of an enigmatic man who’s still viewed as a traitor by many Russians.

“Desert One” (working title)
From two time Academy Award winning director Barbara Kopple, comes the incredible story of Operation Eagle Claw: the attempted Delta Force mission to end the Iran Hostage Crisis. On November 4, 1979, hundreds of Iranian students took up arms and took the American Embassy by storm, and the subsequent attempt to end the hostage stand-off would result in the death of eight American soldiers (while re-shaping how our Special Forces operate), and contribute to the electoral victory of Ronald Reagan over Jimmy Carter. Recounted in context of the broader crisis, “Desert One” will be a nuanced examination of the mission and its considerable legacy both at home and abroad.

“Desert One” is produced by Cabin Creek Films. Zachary Behr is executive producer for HISTORY.

“Rocket Women” (working title)
From Emmy nominated producer Jane Root, comes the incredible story of the very first would-be women astronauts, the Mercury 13. At the height of the US/Soviet space race, NASA’s Randy Lovelace embarked on a secret experiment: he recruited over 20 women to undergo NASA’s radical physical exam – the toughest in the world at the time. When many of the women passed, with some even outperforming the men, it opened up a whole new chapter in America’s space story and ignited an early public debate on gender equality.

“Game on: The Improbable and Shocking Story of the Video Game Business” (working title)
This is the untold story of the personal battles that gave rise to the $100 billion video game industry. Brought to life by Academy Award winning director Daniel Junge, this film is a tale of brilliant innovations, colossal failures, and ego-driven rivalries on a massive scale. It is a 50-year-long, multi-generation epic featuring corporate coups, industrial espionage, secret burial grounds and the promise of unimaginable riches being just one cartridge away.

“Game on: The Improbable and Shocking Story of the Video Game Business” is produced by Efran Films and Stone Cottage Media. Daniel Junge serves as director. Morgan Hertzan and Shawn Efran are executive producers. Zachary Behr is executive producer for HISTORY.

“Watergate”
From Academy Award winning director Charles Ferguson, comes the full story of the conspiracy led by President Richard Nixon and his White House staff and how they were brought to justice. New interviews with journalists, senior Nixon administration officials, members of congress, and prosecutors – combined with archival footage and newly sourced information from the Nixon White House tapes – will bring a fresh perspective on this complex story.

“Where is Angel?” (working title)
From Left/Right, the award-winning producers of The Circus, this documentary will take viewers inside Air Force One on one of the most fateful days in U.S. history – 9/11. From this unique vantage point, viewers will experience the struggles of our nation’s leaders, and members of the civilian and military chain of command, as they grapple with the unforeseen nature and extent of the deadly attack.

“Cola Wars” (working title)
From Herzog & Company, the Emmy Award-winning producers of Gettysburg, The History of Comedy and the acclaimed Decades Series – The Sixties, The Seventies, The Eighties – this film will explore how two of the most powerful companies in the world – Coca Cola and Pepsi – have used advertising campaigns, publicity stunts, and other cutthroat tactics in an incalculably expensive bid to each be the top purveyor of beverages to consumers. It is a story that speaks volumes about who we are as a people, shedding an illuminating–and not always flattering–light on why and how we make the decisions we do.

“Axis of Addicts” (working title)
At the outset of World War II, the Nazis harbored a secret. In spite of their talk of racial, spiritual and physical purity – they were an Axis of drug addicts. It wasn’t just those in the trenches on drugs, Hitler and his High Command were chasing a state of supreme human function via uppers, downers and everything in between. This documentary will explore the origin, impact and lasting effects of the state-sponsored drug use that helped build – and eventually burn – the Third Reich. New sources of information, including never-before-seen historical records, reveal the extent of the Nazi party’s reliance on drugs to power their war effort.

“Speed Demons” (working title)
Executive produced by Dale Earnhardt Jr., this two-hour special highlights the innovative, fearless and larger-than-life renegades who devoted their lives to pursuing the world’s most perilous speed records – and breaking them. Featuring interviews with fanatical “speed demons,” the show chronicles the history of speed through the eyes of those most passionate about it. The program will also follow the inimitable Ed Shadle, a speed record holder, as he makes a pulse-pounding attempt to set the first speed record in 20 years. “Speed Demons” is produced by Pilgrim Media Group. Craig Piligian and Sam Korkis are executive producers for Pilgrim Media Group. Jim Pasquarella is executive producer for History.

“Hot Rods & Muscle Cars” (working title)
This two-hour special tells the story of the rise, fall and resurrection of the hot rod culture in America, born underground by mavericks who loved speed, power and engineering. Highlighting the most iconic, pavement-shredding muscle cars in history – the outlaw cars that broke all the rules – the program will feature the rebels who built them, the renegades who drove them and the indelible imprint they left on American culture. “Hot Rods & Muscle Cars” is produced by Pilgrim Media Group. Craig Piligian and Sam Korkis are executive producers for Pilgrim Media Group. Jim Pasquarella is executive producer for History.

“Truck Wars” (working title)
Since their inception at the turn of the last century, pickup trucks have continued to develop, with manufacturing titans such as Ford, Dodge and Chevrolet competing to build the best of the best. In an hour long special, automotive experts, designers and historians weigh in on the most influential trucks of the past 120 years, covering everything from early Fords based on the Model T and wartime 4×4 Jeeps, to the 1950s luxury Chevy Cameo and the more recent, truly hardcore, high-powered desert truck, the Ford Raptor. This adrenaline-filled special will explore how these heavy-duty vehicles developed, defined off-roading and forever altered the automotive landscape in America. “Truck Wars” is produced by Pilgrim Media Group. Bert Klasey is executive producer for History.

“Hot Wheels” (working title)
In celebration of the 50th anniversary of one of the most popular toys in the world – Hot Wheels – this special will tell the history of this iconic toy’s journey and the brand’s multi-generational influence on car culture and design. “Hot Wheels” is produced by BoBCat. Jeff Conroy, Thom Beers and Sarah Bernard are executive producers for BoBCat. John Verhoff is executive producer for History.