Trevor Noah is among the many who aren’t totally satisfied with politicians’ latest attempt at gun reform, largely because there are some big stipulations that are being left out of it. But he’ll take it, because it’s something — and in his eyes, it’s similar to a certain sexual favor.

This week, a bipartisan gun reform bill was passed by the House, and is expected to be advanced by the Senate on Thursday. Among other things, the legislation increases background checks for anyone under 21 years old who is looking to buy a gun while also closing the “boyfriend loophole.” As it stands, federal law bans people convicted of domestic violence from purchasing a gun, but only if they are living with, married to, or have a child with their partner. The law does not apply to people who are only dating.

“I know for a lot of people, it can be hard to know how to feel about this deal because it doesn’t include a lot of things that people want, you know? It doesn’t ban assault rifles. It doesn’t raise age limits. It doesn’t even do universal background checks, which is the most basic thing imaginable. So for some, this kind of thing feels like trying to stop Godzilla by dropping a few mousetraps around the city.” 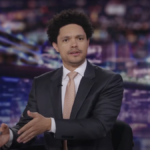 That said, Noah implored people to support this reform, if only for now, because it’s at least some kind of reform. And though he was sincere in that, he also snuck in a joke on the matter.

You can watch Noah’s full segment in the video here and above.