The federal mask mandate on public transportation was struck down yesterday, making face coverings optional on planes, trains and subways in many parts of the country. During “The Daily Show” on Tuesday night, Trevor Noah weighed in.

The late night host first shared clips of several passengers reacting to the news, including one woman who said she was happy “seeing everybody’s face.” He conceded, however, that others might not be so happy with the move — especially since many passengers were allowed to remove their masks mid-flight.

“Let’s be honest, people. Traveling with masks sucks. Your face gets sweaty. You can’t pretend it’s somebody else’s breath that stinks. It always feels like someone is using a tiny, dull saw on the back of you ears to cut them off. There’s a lot of reasons to not like masks, is what I’m saying.”

However, he added: “Look, I don’t care what you think of masks. You have to admit that it is insane to change a safety rule in the middle of a flight, people. Just as a general rule, nothing should change mid-flight ever. I don’t want the cost changing. I don’t want the cabin pressure changing. I definitely don’t want my seat changing so that you can sit next to your wife. You’re smothering her, Alan.”

Noah also reminded viewers that they, regardless of what they think about masks, shouldn’t condemn the flight attendants and pilots who celebrated the end of the mandate.

“People forget that flight attendants weren’t just happy about the masks coming off because of politics. A lot of them were happy because of the way people react to masks and the fact that it has turned their everyday lives basically into UFC.”

Noah then compiled videos of airline passengers screaming and getting into violent altercations with airline crews, showing them all simultaneously on the screen “Brady Bunch” style. 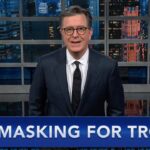 “Two years of that. I don’t even know what was going on, like are those people’s masks made of cocaine? What was going on there?” he asked. “You know, it’s actually amazing that humans can invent jet airplanes to fly around the planet, but inside those technological marvels, we’re just wild animals. Nobody should be acting that way over a mask.”

He continued: “The only time it’s appropriate to have that level of emotion on a flight is if the plane is crashing, or if the in-flight entertainment is stuck on ‘Morbius.’ Then you can throw punches.”