Trevor Noah knows he’s got big shoes to fill as new host of “The Daily Show,” but he also has some established competition to duke it out with on late-night TV.

Here’s the good news: Noah’s cable landscape is less competitive than broadcast TV, and Trevor’s time slot gives him a 35-minute head start versus the Jimmys — Fallon and Kimmel — and Stephen Colbert.

Beyond broadcast, the incoming leader of The Best F#@king News Team Ever also obviously needn’t worry about Larry Wilmore — as Noah serves as “The Nightly Show’s” lead-in — nor Andy Cohen, because in no world does Bravo’s “Watch What Happens Live” share the same core audience with Comedy Central.

So, Conan: It’s essentially mano a mano at 11 p.m. starting tonight. The TBS offering runs longer than the flagship Comedy Central one, so it would likely be the veteran who needs ratings help on an average basis versus the rookie anyway.

But on Facebook, Noah throws a wrench into Conan’s stats, and inherited “Daily Show” comes with a running start on Twitter as well. There, however, 18 million personal Twitter followers is actually second across all of late-night, behind only reigning king Jimmy Fallon. Comedy Central does not break out its shows on YouTube, maintaining a busy network-wide channel instead.

The cable battle is a bit murky in terms of Q Scores, which measure the recognition level and likability of a personality. Neither Noah nor Wilmore are household-enough names to merit inclusion by the Q Score company to this point, while Cohen is more liked than Conan, but far less identifiable by those surveyed.

Below is the full late-night cable breakdown by the numbers. Compare these four fellas with the five from our broadcast landscape study here. 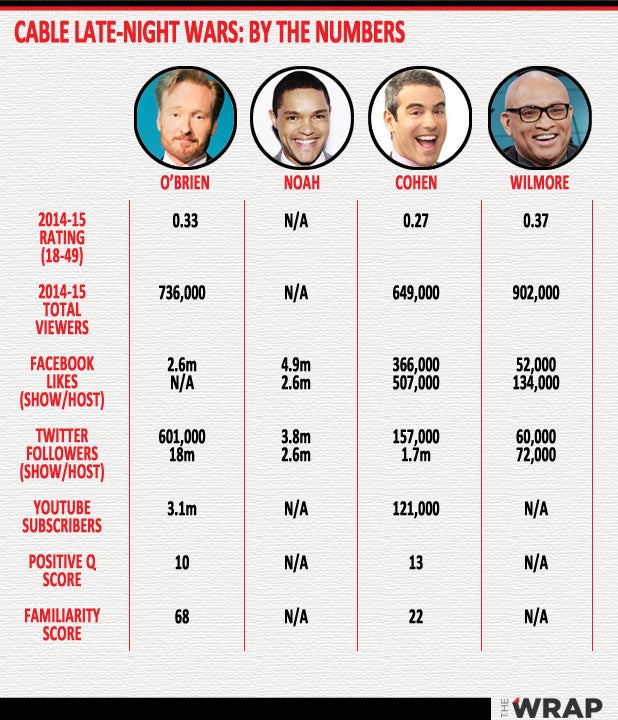