Trump drew wide backlash after hosting the two at his Mar-a-Lago resort last week, considering Ye’s recent string of antisemitic posts and Fuentes’ well-documented legacy of hate speech. But, in the days following the dinner, Trump has attempted to dodge accountability for the meeting by claiming that he had no idea that Fuentes would be at the dinner, and that he didn’t even know who Fuentes was.

And that, Noah actually believes. The host admitted on Tuesday night that that’s a fair defense — but that Trump still probably should’ve caught on fairly quickly during the meal. 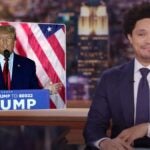 “Like if your friend brings Darth Vader to your house for dinner, that’s not your fault. But 15 minutes in, any decent person would be like ‘I’m not comfortable with how much this guy talks about blowing up planets,'” Noah joked.

Still, the late night host is pleased to see that the GOP isn’t necessarily standing by Trump’s actions this time. Of course, Noah also doesn’t think that will last very long.

“It is nice to see Republican officials speak out against Trump for a change, but we all know how this is gonna end,” he scoffed. “Republicans get mad at Trump for a little while, and then they always get back together with him in the end. Trump scandals are basically like Hallmark movies, you know? Except Trump never actually changes and becomes a better person.”